Hiro loses his memory once again and Angela near gets killed the sylar-way for the third time. Lol @ Hiro thinking Lydia was trying to seduce him. When "Nathan" changed back to Sylar I thought that was it but "Nathan" was able to resurface?? I thought Sylar was the one in control. --JLYK

I'm assuming Nathan and Sylar will duke it out (or nathan will be killed somehow, as evident from the firing of Adrian Pasdar), and Sylar will gain control fully. As per the Hiro story line, I believe now that the "earth splitting" future is set in motion, with the Hiro that was killed by Ando in season 3 being the one that just lost his memories and travelled to the past or future somewhere. I really like where this season is going. It's dynamic for the first time in a while. Instead of focusing on every character in one episode, there are a select few during each episode, which is exactly what I had hoped for. I also like that the story line is unpredictable. I am surprised with every episode that airs. This by far has been my favorite season. Dean 01:16, 24 November 2009 (EST)

Yes, this season is as good as season 1. The only difference is that season 1 had more action while this season focuses alot on drama. There are lots of twists which you do not expect and this episode, thanksgiving, was great. It gets more exciting by the minute. For example, the return of Sylar (it was expected but maybe not like this), Hiro helping Edgar, Hiro and Lydia. --JLYK

Just watched the episode. This was definitely one of the greatest episodes (or may be the greatest) of this season. Completely agree with Dean & JLYK :) --Janrodrigo 00:10, 25 November 2009 (EST)

This 4 episodes we have seen where very good and volume 5 is getting better and better. However i still do think that season 1 was better. They are on the right path.-- Yoshi | Talk | Contributions 09:29, 25 November 2009 (EST)

So can we conclude from this that Damian's powers include more than simply memory restoration? He made Hiro forget various events that occurred to him since he came to the carnival, or rewound his memories, or... something more then merely projecting/restoring lost memories. And the events we saw in the memory flash were things that Hiro hadn't forgotten, so they weren't "restored." --CourtesyofTVRage.com 02:42, 24 November 2009 (EST)

Also, on the Memory Restoration page, the caption of an example even says "Damian manipulates Hiro's memories. But it looks like the discussion there is indicating a change to Memory Manipulation. --CourtesyofTVRage.com 23:34, 24 November 2009 (EST)

Brings back memories, doesn't it. 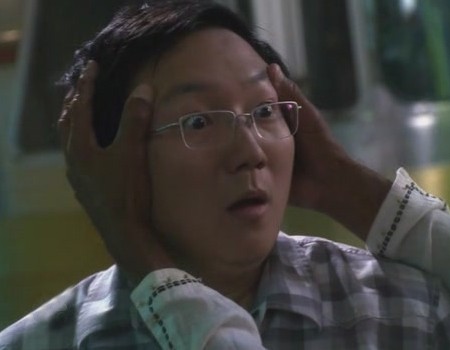 Hey, does anyone think that when Hiro was talking about Watson, he meant Ando? I mean, Watson was Sherlock Holmes' sidekick and Ando is Hiro's sidekick. I know it's a long shot but I just thought I'd put it out there :) -- SlicinDicinEdgar

So glad that Hiro saved Edgar and he didn't end up dead. Hopefully he won't be gone long and will come back and take Samuel down! SlicinDicinEdgar

Another mint ep, Samuel and Sylar, now 2 villains on the loose, both evil and powerful. I can't wait to see what happens to them in the rest of the volume. Thats just those two. Theres loads of characters have great new storylines this volume!-- By Danko CH 12:16, 24 November 2009 (EST)

Anyone notice the similarity to angela's dream?

In the first episode of volume 5 she had a dream where sylar kissed her and asked "what have you done to me?" And then the scene played out right after that. Then in this episode the same thing happened.Gamerelite1 15:22, 24 November 2009 (EST)

Anyone else waiting for the....

I was sure Peter was going to do something to slyar, something like "You don't think i'd leave you here with Sylar in you and not take an ability to protect myself" moment. Alas the plot turned, at least this way we might a get a dual more than 10 seconds long since after the first season. I also wasn't expecting Damian, Amanda or Lauren to show up again, that was a nice suprise :D --Fr0z3nB0nes 18:45, 24 November 2009 (EST)

Wasn´t Joseph supposed to keep Samuel away from people with abilities to restrain his powers? How come all those special dudes are gathered, apparently for a long time? --Cortez 21:18, 24 November 2009 (EST)

Reference to Dying of the Light

Did anyone notice the smilarity between the scene with Sylar holding and Angela and Peter forcefully in the table and the scene in Dying of the Light where Eric Doyle forcefully holds Meredith and Sandra in the table. AND, Sylar kisses Angela, and Eric kisses Meredith. Is it trivia-worth?

And.. it seemed to me that Sylar was using pupper master!?? Is it possible that before he gave Eric as a gift to Danko, he could've emphatisise with him and took his power. I think most probably he would do that. So, I think (these are assumptions of course) that he used Eric's power in thanksgiving table. --Janrodrigo 00:32, 25 November 2009 (EST)

Since I didn't get a very good reception, the signal kept blanking out frequently in the beginning (yeah digital is so much better than Analog), was it mentioned where Lyle was? Because I found it confusing that Lyle wasn't in the episode. --Dman dustin 13:57, 25 November 2009 (EST)

Okay This may be a nub question but, why was Nathan/Sylar affected by Lightning? Arnt you suppose to be immune to your own power? I know elle was being electruted by her own power, but that was of the way because her feet was in water. -- (WaterRatj) 20:34, 26 November 2009 (EST)

That blonde girl in the Carnival's Thanksgiving table was the same girl who turns to gold that Amanda saw while walking on your new home? Because if it is, even if not spoken in the episode, she should not have his name listed in the Characters Appearance? And the ability page don't have to be changed? Gabrielense 20:16, 1 December 2009 (EST)

I just re-watched this episode and when Joseph said he gave Danko a compass I had to go "huh?", so far the compasses have been shown to only work for Evolved humans, which if true is something Joseph would've known. So what would be the point of giving Danko a compass if it didn't work for him in the first place? The Light6 11:28, 2 December 2009 (EST)