In feudal Japan, Hiro is being held captive along with Yaeko and her father in one of Whitebeard's tents by Takezo Kensei, who uses opium to break Hiro's concentration so that he can't use his powers. Yaeko asks him why he is doing this and he tells her that Whitebeard offered him anything he wanted if he captured Hiro. Kensei asked for half the country and for Yaeko as his princess but she maintains her honor and tells him that she loves Hiro. Hiro tells Kensei that he was supposed to be a hero and he responds by saying that he will be a hero to Japan.

In a warehouse in Odessa, Ukraine, Mr. Bennet is taking photographs of the paintings. He calls Mohinder, who is at Molly's bedside, and asks him if the company has given him a gun. Mohinder tells him he doesn't have a gun. When Mr. Bennet tells him he's going to forward pictures of the paintings to him, Mohinder protests, telling him his partner is keeping watch on him. He tells Noah that he is unsure of his motives. Niki shows up and Mohinder hangs up, while Mr. Bennet burns the paintings.

Niki and Mohinder go to see Bob, who approaches them and tells the two that he is evacuating the facility because Matt and Nathan have arrived to warn Bob that Maury is after him.

In 2008, Peter and Caitlin wander the empty streets when they are surrounded by CDC agents and taken to decontamination.

Claire is at home sleeping, when she is woken up by a text from West. She goes downstairs to find that he has made breakfast for her. While Claire isn't pleased, her mother says she is pleased West has come. When Sandra leaves, West shows Claire an article in the local newspaper about what they did to Debbie. Although upset, she kisses West while hiding a family picture.

Matt tells Bob he wants to take him in for protection. Bob disagrees saying they will take Maury down then. He tells Mohinder that he needs to inject Maury with the virus but Mohinder protests. Bob then tells Matt that it will be his responsibly to stop his father, as he is the only one capable as Matt has the same powers as Maury. 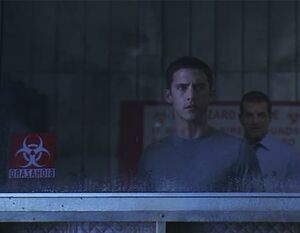 Peter sees what the virus can do.

Back in feudal Japan, Yaeko's father laments that he never should have helped Whitebeard. Yaeko replies that men should not underestimate her as she picks the lock and escapes her chains. She then hurries over to remove the opium from under Hiro and tells him that he needs to concentrate if they are to escape. When the guard returns to his post, he finds the three prisoners are missing.

In the future, Peter and Caitlin are being forced to shower in a building. When they are finished, they are separated and Peter meets with Howard Lemay who shows him his death certificate and asks how he is in New York and why he isn't infected. When Peter asks where Caitlin is the man tells her she's been deported to Ireland since she isn't American. He goes on to tell Peter that the Shanti virus was first reported in March 20, 2007 and since then has killed 93% of the world's population. Those who are left are living in quarantine zones, desperately trying to find a cure. He shows Peter a room full of hundreds of dead bodies, telling him, "It's been a tough week."

Matt is at Molly's bedside, apologizing to her for putting her into the condition she is in. He lets her know that he blames himself for his father leaving. When he tells Molly he loves her, her monitors beep. Matt uses his ability to project "I love you Molly" into the girl's mind. Meanwhile, Mohinder and Niki go to get a sample of the virus. Niki attempts to show Mohinder that what Bob has told him to do is the right choice. He nods and walks around the corner. Niki turns around to see D.L. standing behind her. He calls her a killer, telling her she will never have a life. When Mohinder returns, there is no D.L. and the two walk off as Maury comes out of a room behind them. Nathan and Bob talk in Bob's office. Nathan asks who Adam Monroe is and is told that he is the one trying to kill him and the others, using Maury as his weapon. Bob says they locked him up, but two weeks ago, he escaped. Nathan asks Bob why he should care, and Bob responds that he should care because of Peter - who is still alive.

In the future, Peter is taken to see Angela. Angela embraces Peter who pushes her away as he doesn't remember her. Angela describes Peter's powers and tells him that he absorbs the powers of others and is the most powerful of them all. Angela describes who Peter is to him and tells him that Nathan died in the first outbreak. Angela sees Peter as their only hope, telling him that he can change things. When Peter questions this, Angela explains Peter has Hiro Nakamura's ability to travel in time and thus can change the future if he can gain control over it. Peter is frustrated as he doesn't know how to control any of his abilities and Angela tells him that if he can't figure it out, they will all die of the Shanti virus. Standing with Angela, Peter begins to read her mind and realizes that she's his mother. The two embrace. 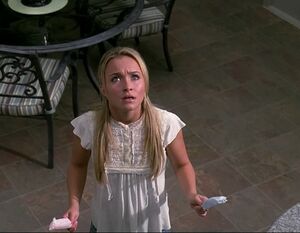 West leaves Claire with her Popsicles.

In the present, at the Bennet household, Claire and West listen to music and kiss on the couch. Claire asks West if his marks hurt, which he tells her no. When Claire wants to tell him something, he assumes he is moving too fast. She tells him she wants Popsicles. From the kitchen, she sees her father enter the house. When West sees him, he panics and pulls Claire into the backyard. She reveals that he is her father. Thinking it's a trap, West flies away. Mr. Bennet meets Claire in the backyard and asks why she has two Popsicles. She hands him one and welcomes him home.

Maury watches as Niki and Mohinder obtain samples of the virus. Again, Niki sees D.L. who argues with her about her involvement in the company. Mohinder sees her talking to herself. Niki watches Bob shoot D.L. who tells Niki that she has to kill Bob. Mohinder becomes concerned as Niki continues to talk with herself and support a figure that isn't there. Niki punches Mohinder and sends him across the room. She grabs a syringe and walks out the door.

Back in feudal Japan, Hiro teleports into the armory tent and gets ready to set it on fire when Kensei appears; he tries unsuccessfully to get Kensei to come to his senses. The two begin to sword fight, fulfilling one of Isaac's prophetic paintings. During their fight, they knock over a lantern and set the tent on fire. The two continue to fight and Hiro disarms Kensei. Hiro offers to teleport Kensei out, but he refuses and swears to make Hiro suffer. Hiro teleports out just as the tent explodes, destroying Whitebeard's camp. 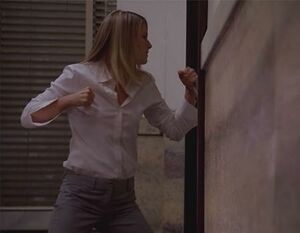 Bob shows Nathan videos of Peter and tells Nathan they last knew Peter was in Ireland. Niki begins punching holes into the door of Bob's office. Matt hears and heads out to investigate, only to find himself in his childhood home where he sees Molly at the table. She explains they are in Maury's nightmare. As Matt tries to escape, Niki breaks the door to Bob's office. Matt is able to pull his father into the nightmare with him and Molly. When Niki grabs Nathan, he and Bob try to bring her to her senses. Seeing it as her only option, she injects herself with the virus. Maury and Matt argue, and Matt tells his father he thinks he can trap him in the nightmare he has created. He tells Maury he isn't scared of him anymore. He says he's a good man, a good cop and a good father, more than his father could have been, and, with Molly, leaves the nightmare. Matt wakes up to find Maury lying on the floor. Molly then wakes up and tells Matt she heard that he loves her.

In the future, Angela leads Peter out of the CDC building, telling him they are going home. Peter spots Caitlin in a nearby deportation line and grabs her hand, attempting to return them home. Peter fails and Caitlin is yanked away from him. Moments later, as Peter screams for Caitlin, he teleports back to Montreal in 2007 and is unable to return to the future.

In Japan, Hiro finds Kensei's helmet in the rubble of the explosion. He tells Yaeko he had killed Kensei and Whitebeard's army has been scattered. She tells him that everything Kensei accomplished, Hiro actually did and that he is, in fact, Takezo Kensei. He tells her that Takezo Kensei had one more story, where he cuts his heart out to save his love. He tells Yaeko he must leave. She tells him as long as she has a voice, the story of Takezo Kensei will be known. They kiss and he teleports away.

Mohinder tries to use his blood to help Niki. He finds that his antibodies cannot cure her.

In present Japan, Ando is working and Hiro appears. Hiro learns they stopped the explosion and tells Ando he wishes to see his father. Ando tells Hiro that his father has been murdered. 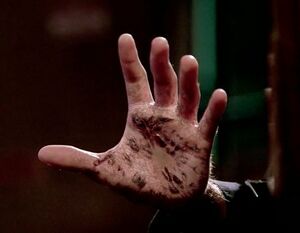 Peter tries to hurt an intruder.

Mohinder tells Bob that the strain Niki injected herself with has no cure. Bob shows Mohinder a police report of a girl who was dropped fifty feet and lived. Bob thinks Claire can help Niki survive. Knowing Mr. Bennet would not allow that, he hands Mohinder a gun, to be prepared. Mohinder reveals to Bob his partnership with Mr. Bennet and their motives to take down the company. He says he does not know what is right and what is wrong.

Sandra tells Noah that Claire has a boyfriend. In her room, sitting on the sofa, Claire tries to text West when her father enters and drops the newspaper article on her lap. She claims it is nothing. The two argue about how they both are putting the family in danger. Mr. Bennet tells the family it is no longer safe and that they must move. Claire tells him that if they do, they are leaving without her.

Peter attempts to teleport back to the future when he hears a noise and sends a bolt of electricity towards it. Someone puts out a hand that absorbs it and then repairs itself. The man steps out and is revealed to be Takezo Kensei. The man introduces himself as Adam, and tells Peter the two of them are going to change history.

"Why is everything so purple?"

"As long as I have breath, anything you love I will lay to waste... I swear, you will suffer."

"This isn't my nightmare, it's yours!"

"Peter, what the hell was that?"

"Of course I know you. It's me, Adam. Don't you remember? You and I are going to change history."