Tracy speaks on the phone with the governor in her apartment. He tells her to switch on the TV, which is featuring an interview with Nathan Petrelli, the now chairman of Homeland Security. Tracy assures the governor she doesn't know anything about what he's doing, and she hasn't spoken to Nathan in two months. On TV, Nathan talks about protecting the American people from a serious threat. As Tracy dresses, she notices the bathroom window is open. After closing and locking it, she turns to see a man in a commando outfit. She grabs his arm and tries to freeze him but can't since he is insulated. She tries to run into the living room where she finds other armed men. She refuses to beg and demands to know what they want, one of them shoots her with a taser dart, and has the other men cover her hands. The leader calls to tell Petrelli they have the first one.

Hiro takes Ando to a fire station and explains that it's now their lair. He presents Ando with a new spandex costume and explains that superheroes must hide their identity. Ando figures that Hiro wants to live through him, and his power is worthless. Hiro disagrees and says it's his destiny to be a superhero. Ando disagrees and Hiro reveals the Ando-cycle, complete with a communications link to their "lair". Hiro can track his location with a GPS implant, and injects Ando with the implant. He explains he has a GPS as well, and the system is keyed to the password of someone he cares about. Ando insists he has had enough and rides away on the Ando-cycle.

Peter is working as a paramedic and dealing with a car accident victim. He's unable to save the victim and his partner Hesam finally pulls him off when Peter refuses to give up. Peter insists he could have saved him, had he been stronger.

Claire is going over college brochures when Angela comes in and says that an elite education is vital. Claire isn't so sure but Angela insists she try to have a normal life. Claire worries about Sylar but Angela insists that he is dead. Her granddaughter doesn't believe her, saying that her father keeps going on trips and she'll find Sylar if no one else believes her. 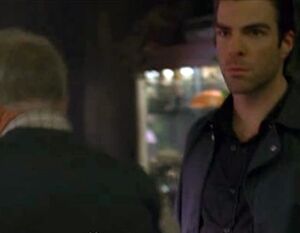 In Baltimore, Sylar goes to a watch shop and picks up a watch. The owner, Martin Gray, comes in and points a shotgun at him thinking he's a thief. Sylar asks where he lived 27 years ago and if he walked out on his family. Sylar says he is Martin's son and has some questions for him.

Daphne superspeeds back into her apartment where Matt is eating. She says she's been working but he's unhappy that she's been using her powers when he's refused to. He wants to live a normal life but she insists it's boring. However, as he talks, a vision of Usutu appears to him. Daphne, who can't see it, says she'll go along with his plans.

As Claire is leaving, she overhears Angela talking to someone. As she listens in and hears that it is Nathan talking to Angela, who admits she can't control Claire. Nathan warns that they have to keep Claire away from Matt and Peter because they're going to take them down. Claire sees that Angela has seen her and walks out, and Angela warns Nathan they have a bigger problem.

Martin explains that he's a different person now and that it was a mistake to have a child with Sylar's mother. Sylar, using his ability, knows that he is not the son of a watchmaker and a woman who collected snow globes and demands answers, and Martin explains that a man who needed money gave Sylar to him. His wife couldn't have children and Martin thought it was the perfect answer. Martin explains the man was his brother and gives Sylar an address, before telling him to leave. Sylar knows he speaks the truth and considers using his power to get more information but decides not to and leaves.

Peter watches as the dead man is taken away. His partner asks if Peter plans to visit his brother, who is in town for the day. He admits that Nathan scares him because he's talking about putting away people who are "different," and figures Peter wouldn't understand. Peter says he doubts it, then takes a call from Claire. She warns him about Nathan's plan to round up people and that Matt is their next target. Peter goes to talk to Angela while Claire goes to warn Matt. Peter gets in a cab and finds that Mohinder is the driver. They speak in a friendly manner, Peter asks Mohinder if he ever had the feeling like he was meant to do something extraordinary and they share a laugh. Mohinder notes that they're all keeping a low profile, except for Nathan. He says that the possibility of uncontrolled powers is a major risk and he's willing to let the government take control. They get to their destination and Mohinder lets him out. 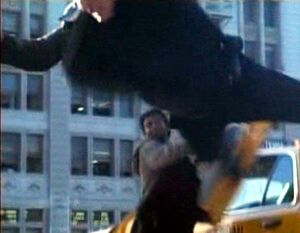 Once Peter is gone, a man gets in the cab behind him. It's the leader of the commando team, and he points a gun at Mohinder, telling him to drive. They go to a parking lot where men in black commando suits are waiting with guns. The man tells Mohinder to get in their van. As Mohinder gets out, he rips off the car door, knocks out the leader, and uses the door as a shield. He runs away and Noah arrives in a SUV and rescues him. As they escape, Noah asks him who he's been in contact with. They get to the exit only to discover that the hunter and his men have cut them off. Noah apologizes and then tasers Mohinder, who staggers out of the car and collapses.

Peter arrives at Angela's home and finds Nathan waiting for him. Nathan informs his brother that their mother isn't there and apologizes for not having seen him in a while. He says it's all his own plan, not his father's plan and he's taking a cautious approach because he was shot the last time he tried to go public. Peter accuses him of being a hypocrite and Nathan says he'd like his input. Peter isn't interested but Nathan asks for a chance to talk over dinner. Peter gives in and leaves, but as he goes Nathan asks him what he can do. Peter points out that the last thing Nathan saw him do was fly, and then leaves.

At his apartment, Matt notices that his turtle has gotten out of his tank. Usutu appears to him and says he has a message for him, and explains that he's an illusion. Usutu says that Matt is on a journey to become a prophet and the world needs him to tell them the future. He says that Matt will learn how to paint the future. Matt sits down with paper and pencil; his eyes turn white almost immediately and he starts to sketch.

Hiro tracks Ando and calls him, trying to apologize. Ando say that he's fighting crime but Hiro pinpoints his location on the computer and discovers he's at a strip club. Ando has no interest in helping people, but he hears the sounds of an attack at Hiro's end. He gets on his motorcycle and heads back to the lair, as men in black take an unconscious Hiro out. 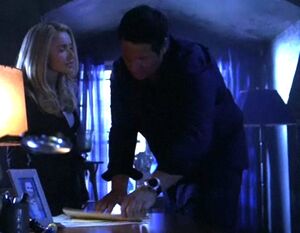 Matt and Claire look at some sketches.

Matt finishes a picture of himself and Claire examining a picture as someone knocks on his door. He draws a gun and finds Claire. She asks if anyone has come to get him and Matt shows her the drawings. There are several other drawings and he says he doesn't understand. He finds another picture of himself with a dart in his neck, just as someone shoots a dart through the window into his neck. The men in black arrive and hold Claire at gunpoint as Matt goes down.

Peter arrives at his apartment and finds Nathan waiting for him. Nathan apologizes for disowning him and says what he's doing is important for the country and the world. He says Peter can't live his life normally because he's not normal, and says he can make special arrangements. Peter wonders what he wants and Nathan says he wants to know that Peter is with him. Peter refuses and says that he'll fight him if necessary. Nathan smiles and asks for a hug, and Noah tasers Peter from behind.

Sylar goes to the home of Samson Gray, taxidermist. The door is open and he walks inside. Sylar finds a picture of himself as a child on the mantelpiece as well as a snow globe. He also notices a smoking cigarette in an ash tray. More men in black emerge, shoot him with tranquilizer darts, and try to immobilize him. Sylar uses his telekinesis to send them back and his electrical powers to stun them. He pulls one of the men to him and demands answers, then starts to slice the man's head open until he talks. The man, Simmons, gives his name but nothing else and Sylar continues to torture him for information.

Back at the lair, Ando tries to come up with Hiro's password, guessing "Kaito" and "Kensei", before finally entering his own name, successfully gaining access. Hiro's location is displayed at an airfield.

At an airplane hangar, Nathan reviews the prisoners, all hooded with blacked out goggles and earmuffs, in orange jumpsuits, and confined to negate their powers. The Hunter arrives and reports that Sylar escaped. He also shows Claire to Nathan; Claire is hooded and is being kept semi-conscious. Nathan asks for a moment alone with her and he tells her to go home and forget what she's seen. She refuses but he puts her in a car and has her driven away.

As the prisoners are being loaded onto a cargo plane, Claire recovers and knocks out the driver by kicking his head into the window of the car. She sees the plane departing and runs to it, then climbs into a landing wheel bay. As the plane lifts off, Nathan looks on and then walks away. 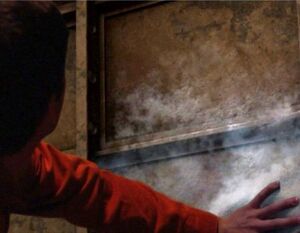 Peter unwittingly causes the airplane to go down.

Aboard the plane, Claire emerges into the cargo hold and unhoods one prisoner: Hiro, drugged and unconscious. She finds Peter and Mohinder and removes the drug feeds from both of them. Peter manages to touch Mohinder and take his power, using it to break his shackles. As Claire frees Tracy, Peter attacks the guards. Claire grabs a taser and goes to the cockpit, stunning one guard and threatening the pilot. She discovers, to her surprise, that Noah is in the co-pilot's seat.

Peter tries to free Tracy as another guard attacks him. He gains Tracy's power and inadvertently touches the side of the plane. It freezes and shatters, and the guards and at least one prisoner are swept out. As the plane starts to go down, the netting Peter is holding onto comes unfastened and he starts to get swept out as well. Mohinder grabs him but starts to lose his grip…

"What can you do these days, Peter?"

"What was the last thing you saw me do?"

"We have a few problems."