I am having troube with primatechpaper.com and I was wondering if you could help me to get on the site. I go to the jobs pag...' (and the only contributor was 'Nick Petrelli')

i guess this seems a pretty good place to kind the 'real' ability names. for example on here theres 'induced radioactivity' but here its named as Radiokinesis. ah well i though you might wanna change some of the names lol

and http://theories.activatingevolution.org/swiki/wiki/index.php/Emotion_Manipulation (bliss and horror) i though i might as well put that one cause on the page it actually says the haitians father had that ability

when do you sleep?

I laugh as I just noticed that you live in EST, and you're up at 2 AM. Tomorrow is Friday and, last I checked, school is in session. Don't you need your shuteye to deal with those second graders and teach your curriculum? ;)--SacValleyDweller (talk) 02:05, 7 December 2007 (EST)

I go all over, but mainly the Southern US, like Biloxi Mississippi, Tampa Bay Florida, Orlando, Auburn, Alabama. Mourning Sage 19:14, 11 December 2007 (EST)

Automatic function or not?

If I attempt to remove (or perhaps add) a character or actor to their correct place in the Portals, will the portal update itself by adding (if/and removing) the next character/actor from the next page or push (if adding) the, now extra, character/actor into the next portal page automatically? Or is this something that needs to be done by hand? -- Lulu .:talk:. 20:03, 20 December 2007 (EST)

I don't know if this warrants an edit or not, so I thought I'd forward it to you. This is regarding the William Congreve puzzle. It's already been noted that the quotes are from "The Mourning Bride." The quotes given are the opening lines from Act One, Scene One.

But the most famous quote from that play is even more intriguing: "Hell hath no fury like a woman scorned." It's interesting to note, particularly in light of Angela Petrelli and her "Pandora's Box" reference. The actual quote is "Heaven has no rage like love to hatred turned, nor Hell a fury like a woman scorned." And ... wait for it ... it's the last line of the last act.

I just forwarded the above message. Somehow Lori managed to post it here. It seems weird to me that she was able to post there. I added an afd to it so it can be deleted.--MiamiVolts (talk) 19:25, 26 December 2007 (EST)

(Incidentally, I forgot Help:Signatures existed because it frustrated my last time I tried to use it, cause I was much less experienced in wikilingo.)

Regardless, after my attempt at doing as the page asks: 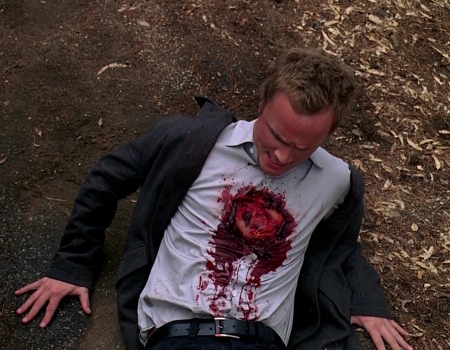 I was going to get around to creating redlink, so why not start with the top? Anyway, I ran into some road blocks. Firstly, Yumi Mizui on IMDb doesn't list her as being connected to Heroes in anyway, so I don't even know if that Yumi Mizui is the same Yumi who is connected to Heroes, anyway. There is also a Yumi listed at Memory Alpha, and I don't know if that is her, either. Her only mention on Wikipedia is on the Tales From The Dead page.

Additionally, the only picture I could find and confirm to be her is this one. Would it be acceptable to crop the picture to (mostly) only feature her, and then resize it?