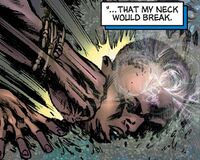 I thought this image was a give away that the Haitian was using his power. You can see the white swirly design coming out of the Haitian's head. It's a bit different from Guillame's power because Guillame's has a rainbowish effect. This one has less color.--Ice Vision 14:07, 5 June 2007 (EDT)

I'm passing thru Harrisburg a couple times for a convention I'm attending towards the end of this month. So if I see an older version of your pride, I'll wave hello. :)--MiamiVolts (talk) 18:39, 5 June 2007 (EDT)

Hey Ryan, thanks for checking out my blog :) Seems I'll be visiting the Wiki a lot more from here on out - I'm working on an entry for the Heroes @ Comic-Con contest and find myself referencing every little detail, lol. Feel free to look me up on MSN or AIM (acid_burn133 at hotmail dot com / acidburn133) if you use either of those - I'm on far too often, lol. Ttyl, Toni.

Others views on heroes

i'm new to the wiki process and i hope you get this link http://www.hatrack.com/osc/reviews/everything/2007-06-03.shtml this is OSC's page and that is where he commented on Sylar. By the way i have been thinking about the cockroaches in Heroes. They seem to be observers because i was watching yesterday and there actually isa cockroach in Suresh's apartment that he kills by crushing it underfoot. Also we probably assume that "Jumpsuit" is a Primatech agent but what if he is working for someone else. The more I think about those cockroaches the more it freaks me out. I really dont want to see an incarnation of the next villian (Urulu) that is visually disturbing. It wolud be more artful for the villian to be disturbing in their behaviour like Sylar was. Also i am willing to put money on an enslaving narrative soming up soon. The heroes besides being powerful are tools. it would be derivative but cool to see some of them shut up in a Weapon X type narrative.