Amber Matthews is the younger sister of Jordan Matthews and the daughter of Tessa Harris. Thought to possess no ability, Amber was put up for adoption. She is an evolved human with the ability to mimic the emotions of others.

Amber walks outside of Arlington University and sits on the grass. She begins to experience an intense headache and hears a loud buzzing noise. When the noise fades, Amber continues reading. She later returns to her dorm room and is surprised when someone knocks on the door. She answers it and finds Jordan Matthews and Jennifer Lehane. She reveals herself to be Amber Matthews and is confused when Jenni asks Jordan is Amber is his sister.

Amber sits on her bed as Jordan sits opposite her. Amber is confused as how Jordan is her brother and he reaches over and touches her. Jordan views her past and learns that their mother gave her up at birth. Amber is saddened by this while Jordan is happy that he has a sister. Amber then receives another headache accompanied by a buzzing noise. Jordan uses another ability and learns that Amber has the ability to feel the emotions of others. Amber is frightened by this and when Noah Bennet arrives and leaves, the three learn that he is returning with some agents. Jordan wants Amber to leave with him and Jenni but Amber refuses. This angers Jenni and Amber cannot help but feel angry as well. Jordan accepts this and leaves.

Another knock on her door causes Amber to open it and discover Noah, shocked that she is still there. His agents burst into the room and Amber backs away frightened. She is so scared that she accidentally causes all the agents to feel great amounts of fear and paranoia. Amber is shocked as they all fall to the floor scared and then watches as Jordan knocks Noah out from behind. Amber takes his hand as he asks her if she is ready to run.

Amber walks through a park and notices Jennifer Lehane following her. Amber walks faster and becomes outraged when Jenni attempts to tell her to embrace her ability. Amber claims Jenni has no idea how she feels and that she should leave. Amber attempts to walk away but Jenni grabs her shoulder, stating that they need to stick together. Amber turns around and slaps Jenni, hard. Jordan then catches up with the girls and grabs Amber, who begins to cry. Amber tells Jordan that she can feel all the anger and hate rushing through her. Jordan tells her to fight it and Amber cries harder, stating that she can't. 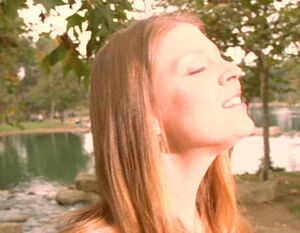 Jordan and Jenni sit with Amber once she has calmed down. Jordan shares with them a time where he could not control his ability and how it made him feel. He then tells Amber that she can feel and control every emotion and that she should try it out. Amber gets up and smiles as she sees a happy family sharing a picnic. She looks around and sees two teenagers holding hands and then looks back at Jordan and Jenni, feeling what they feel. Amber's expression then changes as she tells Jordan that she can feel everything. Jordan knows what this means and gets up. Amber clutches her head in pain and begins to scream. Jenni and all the other people in the park begin to scream and hallucinate as only Amber and Jordan are unaffected. Amber screams in more pain and looks at Jordan, who apologizes to her. Amber is then knocked unconscious by her brother.

Amber possesses the ability to mimic and manipulate the emotions of others. She seems to unknowingly mimic the emotions of others, feeling the same emotion as them or in other cases, mimicking multiple emotions at once and causing a massive buzzing noise to bombard her mind. Recently, with some encouragement, Amber has been able to specifically pick out the emotions she mimics, however, even then she eventually overloads.

Amber is also able to induce emotions into other people as shown when she caused several DHS agents to become terrified as well as an entire park full of people to hallucinate and scream in pain. Amber is currently unable to control this aspect as it only occurs when she overloads with emotions.