Joshua Lincoln was recruited to the Company to help track down and capture the Level 5 escapees. After completing his task by helping defeat Emily Rose, Joshua was fired from his position as Company Agent. He began working as a nurse, helping the elderly. Joshua was captured by the government and has become a fugitive. He is an evolved human with the ability to duplicate the abilities of other evolved humans.

Growing up in an average suburban household, Joshua's parents were taken from him at an early age. Following that accident, Joshua's life mainly revolved around getting through the next day. Spending most of his school life just going through the motions, he discovered that he had a passion for writing and decided to make it his lifetime career. However, he manifested his ability before he could make his dream a reality and has been unable to pursue his writing for fear of what might happen.

Joshua strongly believes that everybody should have a fair chance and likes to see the good in people, rather than the bad. He has a trustworthy nature and a stubborn attitude that sometimes makes him seem gullible.

While living alone in Boston, Joshua is targeted by a group of Company Agents. Two of them pose as FBI Agents to try and win his trust but he attacks them with his power, setting the rest of the agents on a hunt for him. After being captured by the "Seer", Joshua is recruited to The Company and given the task of capturing the level 5 escapees. To prepare him for this task, Company Agent Tina Bui trains him alongside another recruit named Ethan Campbell. Together, Joshua, Ethan, Tina and Tyson Russel go after two dangerous villains that are running amuck in Central Park. The villains, Vickie Palamino and Nicholas Sawe, are defeated and Joshua is given a new partner, Alan Carter.

Joshua and Alan are assigned to follow the rest of the escapees, starting with Ricardo Silva, who has kidnapped a very special girl. The partners fail to rescue Anna and are then sent after the final escapee, a powerful woman named Emily Rose. This confrontation results in the death of Alan and capture of Joshua, who, during the eclipse, manages to bond with Emily on a level that surprises even him. Believing that she wishes no harm, Joshua agrees to try and protect her.

When Emily's powers return, she attacks and nearly kills Joshua. He manages to fight her off but is gravely injured and unable to escape from her warehouse. When his fellow agents arrive to stop her, Joshua tries his best to assist them without fully harming Emily. In the climax of the battle, Joshua uses his telekinesis to stop Tyson's bullet from killing Emily. Sadly, Emily takes her own life, making Joshua's efforts all for nothing. He returns to Primatech with the others but discovers that he was just a pawn in Angela Petrelli's game. He is fired and wanders New York, blaming himself for the deaths of Emily and Ethan.

One year after his mission in Seoul, Alan Carter returns to America and meets with Angela and Joshua.

Joshua hands out medication to the elderly people he takes care of. Evan Winston pops up, camera in hand, and begins narrating every one of Joshua's movements. Annoyed, Joshua tells him to stop. Evan goes on a rant about how "normal" Joshua is and how he needs to believe in the impossible. He then calls Joshua a loser and leaves. Joshua gets back to work, deep in thought. Later, while Joshua is writing reports about the patients, he notices a man talking to one of his patients. When Evan once again begins to narrate his movements, Joshua becomes so annoyed that he uses his enhanced strength to lift Evan high into the air. He threatens him and Evan runs away. When Joshua sees that everybody in the home is angry with him, he decides to go after Evan. While looking for him, Joshua sees Evan being attacked by government agents. He tries to help but he himself is captured by Danko.

Later, on board Flight 195, Joshua's drug shunt is removed and he sees all of the prisoners. As the plane begins to go down, he spots his former friends. He notices in horror that Jordan's restraints are breaking.

After Flight 195 crashes in the Arkansas bushes, Joshua hides in the bushes, waiting for agents to pass by. One agent walks by and Joshua incapacitates him with a shockwave. He takes the agent's uniform and infiltrates the camp, acting as a guard for Claire Bennet. Fellow agent Rachel Mills warns Joshua about Claire but he shrugs it off and pats Claire's shoulder. He unknowingly duplicates her power and receives a stern threat from Claire. He stands, and in an instant, a blonde girl speeds in and rescues Claire.

Joshua accompanies a squad to the hills, where an agent shoots Daphne Millbrook in the chest. While Claire protects her fellow fugitives, Joshua prepares to take out the shooter. Before he can fire, the shooter turns and shoots him dead. Later, Joshua awakens on an autopsy table after regenerating. He looks around and says "Oh shi-".

Joshua regenerates on an operating table. He looks around, shocked at what has happened. As Joshua searches the compound, he finds many prisoners who are all gravely wounded. He steals the clothes of an agent and searches for a way to free the prisoners. During his search, he spots Tracy Strauss, who is being tortured. She sees Joshua and mouths the word "help".

Joshua finds Building 26's control room and searches through their files. He finds information on all of their prisoners and then releases them by shutting off their locks. Satisfied with freeing the prisoners, Joshua prepares to leave. However, a file about a big bag and tag catches his eye. Joshua opens it and learns of all of their targets. One name catches his attention. He is unable to accept it for some reason and says that it is impossible. He quickly runs out of the room.

Joshua breaks into a warehouse in Washington, searching for something. He is discovered by Evan, who alerts Rictor Trundall. Rictor asks Joshua what he is doing and Joshua tells him that he is looking for someone. Rictor then asks if Joshua has any powers, and Joshua says that he does. Rictor offers Joshua a place on his team but Joshua declines. Before leaving, Joshua tells Rictor that he should stop what he is doing, as it could ruin everyone's chances of getting back to a normal life.

Joshua soon finds a house and enters it, finding it filled with rotted corpses. The body of an agent is thrown through a door, prompting Joshua to jump back in alarm. He then faces the person who through the agent through the door. Emily Rose.

Elisa remembers her time as an agent and the many missions she went on, including capturing Joshua.

Joshua sits down, shocked by the discovery of Emily Rose's survival. Emily approaches him but Joshua warns her to stay away. Emily asks him if he is alright and Joshua laughs. He asks her if she remembers him and Emily explains that it would be difficult to remember him seeing as how she doesn't even remember herself. Joshua tells her who she is and then asks her if she has noticed anything out of the ordinary. Emily looks at the dead bodies and asks if he is talking about the fact that she can kill people. Emily sits down with Joshua and asks if they used to go out. Joshua then tells her about his own ability and about the Company. He tells her about how she was locked up on Level 5 and how, when she escaped, the two of them met. Emily says that Joshua will likely be contacted by the people who came to her because he has multiple abilities and Joshua asks who she is talking about. She then tells him about LAWR.

Joshua stands, but then sits back down. Emily asks him what he is doing and Joshua explains that he has no idea what to do now that he knows she is alive. He explains that he felt a lot of guilt over her death and is unsure of what to do now that the guilt is gone. Emily nods in understanding and then asks if she can come with him. Joshua is surprised by the offer but then warns her that the world is not safe for them. He jump starts her memory and, when she refuses to look at him, he asks if she is okay. Emily raises her head and stares at Joshua, who is scared by the fact that Emily's eyes are now completely white.

Growing up, Joshua was left alone frequently as his parents were often away on work trips. Forced to grow up quickly, Joshua began to harbor feelings of great resentment towards parents or any authority figures. However, following a car crash that took the lives of both his parents, Joshua's feelings disappeared as he was taken in by his aunt Helen Lincoln. As far as grades go, Joshua received top marks in most subjects but reports made by the teachers claim that he was uninspired and seemed to only do what was required of him, nothing more. Joshua found a passion in writing that changed his entire outlook on life. Graduating with honours, he quickly delved into college and managed to leave with a degree in english literature and journalism. Joshua's career as a journalist was short lived as one of his early reports was focused on Jessica Wright, an evolved human who could move things with her mind. Joshua's ability manifested after meeting her and he suffered a mental breakdown. After recovering from this breakdown, Joshua's uncontrolled telekinesis led him to attack and kill two people, thus attracting our attention.

A recruitment process was conducted and Joshua passed with flying colours, gaining control and perspective over his abilities. Further investigation does not seem to be required as Joshua shows skill in both tracking and combat, making him a valuable asset in the field.

Early reports showed possible signs of an early case of schizophrenia, however, after being examined by both psychiatrists and The Seer, it was confirmed that Joshua's mental state was perfectly healthy. Because of his troubled childhood, some authority issues are evident in Mr Lincoln but they are often subsided by his necessity to do things for "the greater good". 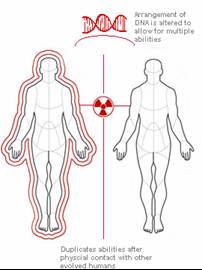 Joshua has the power to recreate abilities after touching other evolved humans. To use this ability, Joshua needs to physically touch someone with an ability. While touching them, a flash of light escapes his hand and he is able to use the power whenever he pleases. This process seems to leave other evolved humans in a temporarily weakened state.

According to his assignment tracker, Joshua's biological is 73, his cerebral is 42, his elemental is 58 and his temporal/spatial is 21. His control index is 59%.