In Building 26, Danko enters the control room, speaking into a microphone. He demands to know if his agents are ready. Squad A, led by Tyson, announces that they are ready. Squad B, led by Noah, confirms that they are ready to go. Squad C, led by Leon Griffin, also confirms their status. Danko punches in a code on the computer and several hundred images pop up. Danko tells them that they know who their targets are and that they have their orders. While Leon is eager to go, both Tyson and Noah look worried.

In Phoenix, Arizona, Norman Ventris sits on a park bench with his girlfriend, Paula Crescent. Norman talks about their life together and how he has never felt lucky. Paula tells him that even though he lost his job, and his house, and his car, and all the money he had, she will still stay with him. Norman laughs hysterically, claiming that he won all of those things back. Paula is confused and asks how he could do that. Norman tells her he entered a one in a hundred bet and won. Paula claims that he has never been lucky and Norman reveals that he can change the likelihood of something happening. He demonstrates this by making money fall from the sky. 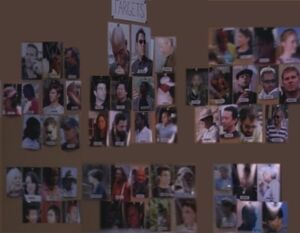 Just some of Danko's many targets.

In Columbus, Ohio, David Goldberg sits alone in a park. Tyson and Olivia approach him and pull out their tasers. David stands and raises his hands but Tyson shoots him with a taser. Olivia contacts Noah and tells him to go ahead with his target.

In Arlington University, Amber Matthews sits down outside on the grass and begins reading a book. She suddenly looks up and holds her head in pain. She hears a loud buzzing noise and when it stops, she shakes her head and continues reading. Across the street, Noah watches calmly. Elsewhere, Jordan sits at a diner and views the history of a coffee mug. Jenni then sits next to him. Jordan is surprised to see her and Jenni explains that someone called REBEL told her that he was here. Her phone suddenly goes off again and the message gives them the address of someone called “Amber”. REBEL tells them that agents are after her and she needs help.

Leon kicks down a door and shoots a taser at a man. His target, Lester Manning, jumps onto a wall and begins to fly. He attempts to escape to a higher floor but Leon reloads and shoots him down.

Tina and Drake pull over. Tina asks Drake if he is sure that he can control his power and comments that while they were driving, he blew up three trees and four street lights. Drake insists that he is just nervous and wonders why the government would go after someone so innocent. Tina says that she doesn’t know and they step out of the car. They then head inside the primary school.

Amber returns to her dorm room and lies down on her bed. The buzzing noise continues and she groans in pain. She suddenly begins to sweat and the buzzing noise gets louder and louder. She clutches her head tighter and then there is a knock on the door that silences the buzzing. Amber opens the door and Jordan asks if she is Amber. She says that she is Amber Matthews and Jordan eyes her from top to bottom. Jenni steps into view and asks if Amber is Jordan’s sister.

At a warehouse in Washington, a metal lock begins to heat up. Martha Landett continues to use her ability until the lock completely melts. Rictor tells the rest of his team to move out and two men begin searching the warehouse. Edward Motley opens a large container while Evan searches down the hall. He hears a noise and frightfully asks if anyone is there. He shines his flashlight and the light comes upon Joshua. Evan yells for Rictor to come quick.

Tyson and Olivia knock on the door of a house that appears to be holding a party. Paula answers the door and asks if she can help them. Olivia shows her a police badge and asks to speak with Norman. While Paula goes to fetch him, Tyson tells Olivia that Norman was one of his first missions and that he manifested during his teenage years but his memories were erased. Norman shows up and asks if he can help them. Olivia pulls out her taser and asks him to come with them. Norman smiles and asks if they can let him slip through their fingers and Olivia agrees that it is a good plan. She walks away but Tyson shoot s Norman and removes his earpiece, stating that he didn’t hear him.

Rictor asks Joshua if he has any powers and Joshua says that he does. Rictor wonders why he is searching through a Building 26 warehouse and Joshua explains that he is looking for a friend. He asks Evan if he has really joined up with the bad guys and Rictor corrects him, saying that they are not bad, they are angry. Joshua says that they will ruin everything for everyone if they continue doing what they’re doing and leaves. Evan asks if Rictor is going to kill Joshua and Rictor says that he would like to see what he does next. 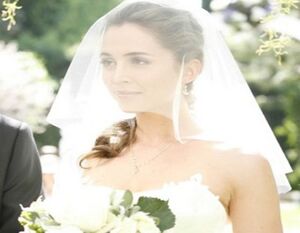 Jordan and Jenni sit on Amber’s roommate’s bed while Amber sits on hers. Jordan is shocked and wonders if she really is his sister. He touches her hand and views her history, learning that when she was born, Tessa Harris, gave Amber up for adoption because she felt that, without powers, she might get hurt. Jordan is a little hurt that their mother would do such a thing but is still happy that Amber is his sister. Amber’s buzzing returns and she cries out in pain. Jordan is suddenly able to access his foresight and tells Amber that she is actually sensing other peoples’ emotions. He then looks at Jenni and receives a vision of her in a wedding dress, walking down the aisle to meet her new husband, him. Jordan pulls out of the vision and stares at Jenni in wonder.

Christina Summars sits in a college class, contemplating what to do next. Her teacher finishes righting a complex mathematical algorithm on the board and Christina uses her ability to solve it. Olivia knocks on the door and shows her badge, asking to speak with Christina. When Christina gets into the hallway, Olivia tasers her.

Tina and Drake knock on the door of a classroom and Tina asks for a moment with the students. Before she can say anything else, Samantha and Rachel burst into the classroom and Samantha picks up her little brother, saying that she is taking Ryan home. Tina stops her on the way out, saying that Ryan is in danger. Samantha suspects a trap and Rachel covers Ryan’s eyes as Samantha rips the negative emotions from both Tina and Drake, effectively knocking them out. Rictor asks Evan if they have what they need and Martha interrupts, saying that she found an encrypted message giving information about two thieves who are heading to Fort Worth. She tells Rictor that the thieves have their package and that LAWR is once again trying to stop them. Rictor complains that LAWR is always getting in their way and tells his team that they have done a good job. As they leave, Rictor stands outside the building and closes his eyes. He brings his hands together and the building slowly begins to disintegrate. 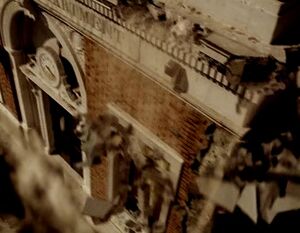 Rictor brings down a Building 26 faculty.

Noah knocks on Amber’s door and Jordan answers. Noah is pleased that Jordan escaped and hands him a message from Angela Petrelli. Noah leaves and Jordan reads the message. Amber asks what it says and Jordan says that it is about her. He says that Angela knows about Amber’s power and needs her help with something. Jenni looks outside and sees Noah directing a squad of agents into the building. Jenni tells them that they have to leave and Amber yells that she is not going anywhere. She says that Jordan and Jenni are crazy and tells them to leave. Jordan is hurt and Jenni becomes angry, saying that they came to help. Amber becomes even angrier and screams for them to leave. Jordan sees that Amber is in fact mimicking Jenni’s anger and decides that their presence is doing nothing to help her. He tells Amber that he will be back and leaves. Jenni shakes her head and warns Amber that some agents are on their way.

Tyson and Olivia return to Building 26 and ask Danko if Noah or Leon have returned. Olivia is worried when Danko says that Leon has broken radio contact and states that they should send a back-up team in to help them. Danko says that it is too risky and turns their attention to the screen. He tells them that she will be their new target. Tyson looks at the screen and asks how it is possible.

Tina awakens and shakes Drake back into consciousness. He is angry that Ryan escaped but Tina tells him that they have bigger problems. A squad of agents arrive and send the school kids running. Tina stands and surrenders, being shot in the chest with a taser. Drake doesn’t give up so easily and destroys a van. An agent shoots him and he passes out.

Amber finishes packing and receives a knock on her door. Before going outside, she notices that it has begun to rain. She opens the door and a shocked Noah asks if she is Amber Matthews. Amber asks why he is looking at her as though she should be gone and suddenly, several armed agents burst into the room. Amber screams and the buzzing noise returns. She begs them to let her go and, to her surprise, the men fall to the floor, shaking in fear. Noah, who is the only one unaffected, asks Amber what she did. Suddenly, someone knocks Noah in the back of the head. Jordan pockets his gun and Jenni points to the window, saying that she told him it would rain. Jordan nods, saying that she guessed right. He faces Amber and asks if she is ready to come with him.

Back at Building 26, Tina, Drake, Norman, Andrew, Christina, and twelve other masked figures are pushed into a transport train. Danko watches victoriously.

Elsewhere, in Washington, Joshua enters a small house. He finds the rotted bodies of several agents and sees maggotts crawling out of a dead man. He is horrified by this but slowly and silently continues forward. Suddenly, a dead agent, Leon, is pushed through a door. Joshua steps through the broken door and faces Leon’s killer. Emily Rose.

"Hey, I guess you really can predict the weather"

"They are targets, nothing else"

- Danko to his team