From Heroes Wiki
< User:Citizen
Jump to navigation Jump to search

In the desert outside Las Vegas, Niki Sanders is digging a hole when she unearths a body. She finds a skull ring on the corpse's finger and takes it, but then proceeds to bury the bodies of Linderman's thugs.

At Union Wells High School, Claire Bennet tells her father that if the football team wins, she'll be out late for the bonfire. He tells her to be careful.

Back in Tokyo, Hiro Nakamura rushes up to his friend Ando Masahashi's desk to enlist his aid. He shows Ando the issue of 9th Wonders! he picked up in the future. Ando remains skeptical, even as the comic accurately predicts the conversation he's having.

In New York, Peter Petrelli looks somber as he prepares to test his powers. He spreads his arms, looks up, and falls forward... only to crash to the ground at the foot of the monkey bars he's just jumped from. Try as he might, he just can't make himself fly the way he did the night before.

He visits his brother's campaign headquarters to discuss what happened with Nathan. As usual, Nathan dismisses him, and Peter shows him a copy of Activating Evolution by Chandra Suresh which he checked out of the library. Nathan tells him that a reporter is investigating Peter's apparent suicide attempt.

In his father's apartment, Mohinder Suresh is continuing to work on his father's research. Eden comes in, bringing macaroni and cheese. Mohinder becomes frustrated when he can't figure out the algorithm and throws the laptop. Eden discovers a small journal stuck inside the computer's casing. Inside are various notes, an address for Sylar in Queens, and a key taped in place.

At the FBI Headquarters in Los Angeles, Agent Audrey Hanson questions Officer Matt Parkman about how he found Molly Walker, the little girl who had been presumed missing at the crime scene, and how he knew the name "Sylar". Matt confesses that he's hearing people's thoughts. When he successfully reads Audrey's mind, she enlists his aid in the investigation.

Zach confronts Claire about the missing tape. She once again reiterates that she just wants to be normal, and suggests he try it himself.

Isaac Mendez returns to his studio to find Simone Deveaux gathering his paintings together for a show. She tells him they can use the money to pay for rehab, and that she's thrown his drugs away. He again insists his paintings are predicting the future, and when he gives Simone an ultimatum, she leaves him. 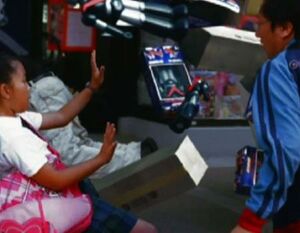 Hiro stops time to save a little girl.

At that moment, Hiro calls Isaac to warn him, but Isaac, unable to understand Japanese, hangs up on him. Hiro, following the comic book, has taken Ando to the site of an accident where a Japanese schoolgirl is about to be hit by a truck. They locate the girl, but are too late to prevent the accident. At the last instant, Hiro freezes time and moves the girl out of harm's way. Ando finally reluctantly agrees to help him.

Back in the desert, Niki has finally finished burying the thugs. She decides to confront Paulette Hawkins, D.L.'s mother. Niki shows her the ring, and claims that D.L.'s crew all wore them. She believes that he robbed Mr. Linderman of two million dollars and then killed his own crew, but Paulette insists he was framed. Niki tells her mother-in-law she wants her out of Micah's life, then leaves.

Audrey takes Matt to speak to Molly Walker, hoping he can use his powers to get more clues about Sylar. Audrey explains Sylar's modus operandi: victims pinned to the wall by household objects with no signs of physical contact.

Mohinder and Eden visit the address they found for Sylar. When there's no answer, Mohinder tries the key, but it doesn't work. Eden suggests they leave, but Mohinder forces the door. Inside, they discover a strange scene: books about autopsies, a copy of Activating Evolution ... and a secret room. Inside the secret room is a more complete version of the map. Eden notes that one of the data points is Nathan Petrelli, and tells Mohinder that she recognizes him because he's running for Congress. At the back of the secret room, Mohinder finds a curtained off area covered with frantic graffiti, all reading "Forgive me" and "I have sinned".

As Audrey and Matt approach the safe room, they hear Molly screaming and see a shadowy figure Audrey presumes to be Sylar dragging the girl off. Matt sees an agent's body pinned to the wall by a chair. He comforts the girl while Audrey pursues the suspect. She draws her gun on him, but he somehow forces her backwards and makes her point her gun at her own head. Before he can make her fire, however, Matt arrives and fires several shots at the suspect, who drops. As he checks on Audrey, the man rises to his feet unharmed, and promptly disappears.

Ando and Hiro discuss the logistics of time travel on the flight from Tokyo to Los Angeles.

Simone runs into Peter in the lobby of her father's building. He tells her that he's quit his job as a home hospice nurse, and that he's destined to do something bigger. She tells him she'll miss him and he tells her that everyone bumps into each other in New York sooner or later.

At the bonfire, Brody attempts to comfort a brooding Claire. Brody kisses her and leads her off. As they go off together, another girl looks on.

Matt arrives home to find his wife still awake. He tries to tell her about his day, but she gives him a frosty reception. She tells him she thinks he's mad at her because she has succeeded and he has failed. He overhears her thinking that she wishes he would leave, so he does.

Claire and Brody are kissing on the bleachers, well away from the rest of the party. When she tries to brush off his advances, he tries to force her. She falls and impales her head on a broken tree limb, apparently dead.

Niki and Micah are driving away from D.L.'s mother's house. They discuss D.L., and Micah implies that he knows where his father is. Just then, Niki is pulled over by a policeman. The officer tells her Mr. Linderman wants to see her.

At Nathan's campaign event, Peter runs into Simone. Just as they are getting closer, Nathan begins his speech. He tells the audience that his father committed suicide after a battle with depression and claims that Peter's fall was also a depression-related suicide attempt. Peter storms out and Simone follows him. 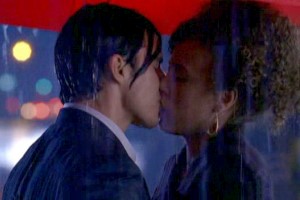 At the airport in Los Angeles, Hiro and Ando are renting a car from a Hotspur employee for the rest of their journey, again following the comic book. As Ando watches a clip of Niki stripping on his iPod, Hiro reaches the last page of the comic, which shows them driving off towards Las Vegas.

In a Los Angeles bar, Matt reads the barman's thoughts and, realizing he doesn't want to make small talk, orders a drink. He begins to overhear the other patrons' thoughts, but eventually notices a mysterious man whose thoughts he can't read. As he gets up, he collapses to the floor.

Mohinder and Eden lead the police back to Sylar's apartment, only to discover everything has vanished.

Peter attacks Nathan as he and his entourage head for his vehicle. Nathan admits that there never was a reporter looking into Peter's fall. Peter runs into Simone in the street, who tells him she knows he didn't try to kill himself. They kiss, just as Isaac is looking at a sketch he drew sometime prior depicting the same scene.

In an exam room, someone removes the branch from Claire's head. She wakes up, only to discover she's been cut open for an autopsy.

"Suddenly, I'm in New York! Five weeks in the future!"

"Been hitting the sake?"

"I found the book's author, but he was dead! Then there's a nuclear explosion. Ka-Boom! It all happens in five weeks, and you and I have to stop it!"

"So that's it? You're going to go just pump your pom-poms and pretend you're not any different than any other girl on the squad?"

"But you are, Claire! You are different. Don't you see that none of this matters? School spirit doesn't matter. Being a pretty blonde cheerleader doesn't matter. It's not who you are anymore."

"Who am I? So what, I can crawl through a woodchipper and live to tell about it. That narrows my choices in life to freak or guinea pig, in most cases both. What's wrong with wanting to be normal? You should try it."

"I don't want to lose you, Simone. But if you don't believe in me, then you shouldn't be here"

"Fine. You think you can paint the future? Paint one without me in it."

"My only concern is whether I need to hide my true identity. Perhaps a costume?"

"You even mention tights and a cape, I'm going home."