Below is an episode by episode recount of Emily Rose's history in the Chronicles universe. 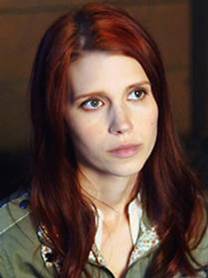 Emily, as he appears in Season One

Joshua Lincoln and Alan Carter awaken to find themselves trapped within a warehouse. Emily calls out to them, telling them to be afraid of her. Joshua uses his power to release himself and Alan. Alan rushes over and retrieves a gun from one of Emily's dead victims. Emily sees this and jumps out of the shadows, pinning Alan to the wall. She uses her ability and kills him. Emily then turns to a shocked Joshua.

With her powers gone, Emily makes the decision to kill herself. She is overcome with grief about what she has done and is comforted by Joshua, who tries to see if she is okay. Emily explains to him that her ability makes her a monster and she has to take souls so she can feed, because anything else she tries to eat turns to ash. She remembers an incident 5 years ago which ended up on the nightly news. During this, Emily's parents suspected Emily had an ability and as such Emily was bagged and tagged by Tina Bui and Tyson Russel.

Emily holds a gun in her hand and contemplates shooting herself. Joshua takes the gun and throws it away from her, stating that a new company named Pinehearst will be able to remove her ability. Emily thinks it is too dangerous and remembers three years ago, while she was being kept in Level 2, where she discovered that Primatech was no longer researching a way to remove her powers. Emily was then transferred into Level 5. During her stay in Level 5, Emily was overcome with hunger and screamed for more food. She was visited by Tyson who refused to give her any people to eat. In present time, Emily reveals to Joshua more about her ability, including the fact that it comes with another personality, one that loves to kill and eat.

As the eclipse begins to end, Emily begs Joshua to leave her. However, once the eclipse completely ends, Emily stands and smiles at Joshua, who has discovered that he is locked inside with her. Emily raises her hand and begins to take his soul.

Reverting back to her "evil self", Emily proceeds to remove Joshua's soul. Joshua manages to use his own power to throw Emily away, halting her power. As Joshua attempts to escape, Emily harnesses another aspect of her ability, allowing her to control the bodies of souls she targets. She forces Joshua to be pinned onto the wall and once again tries to remove his soul, this time being stopped by Tina Bui, who breaks into the warehouse.

Emily isn't impressed and controls Tina, pushing her onto the same wall as Joshua. However, while she is doing this, Joshua uses another ability and attacks Emily. As Tina rushes for a sedative, Emily quickly removes her soul, killing her. As she watches Joshua mourn Tina, Emily reverts to her kind nature and accesses yet another aspect of her power, returning Tina's soul/life. However, as more Company agents barge into her warehouse, brandishing weopons, Emily once again turns into her evil self and sends everyone flying backwards. As one agent fails to harm her, Emily shoots him in the chest and proceeds to remove his soul in a mass of white smoke.

After Emily kills Ethan, she is bombarded by a massive wave and is shot at by Tyson. All shots miss and Emily uses her power on both Tyson and Joshua but stops after she hears Tina's phone ringing. Emily answers and hears Angela Petrelli tell her that "Lily" can be controlled. Tyson uses this opportunity and shoots Emily in the head. However, Joshua stops the bullet as Emily has reverted to her kind self. Both Tina and Emily plead with Joshua to remove his hold over the bullet, but he refuses to. Tina eventually tazers Joshua, releasing the bullet, however, before the bullet hits Emily explodes in a mass of white light.

After the death of Emily, Tina reveals to Joshua that over her time in Level 5, Emily and Tina became friends and that it was with a heavy heart that she urged Joshua to kill Emily.