Below is an episode by episode recount of Angela Petrelli's history in the Chronicles universe. 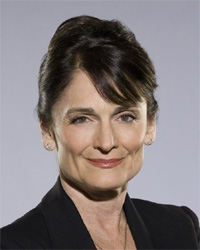 Angela, as she appears in Season One

Angela sits with Joshua Lincoln and gives him some information regarding the deaths of several students. When asked why she is telling him this, Angela replies that she is giving him his targets. She offers him a job as an agent and explains that twelve criminals have broken out and she needs help capturing them. Joshua takes the job and leaves.

Later, Angela watches a security feed of Sylar with "The Seer". Angela asks him what he sees in Sylar. Jordan focuses, and tells her not to give up. As he leaves, Angela views additional security footage of several agents, eventually coming across a surveillance image of two escaped level 5 detainees. Angela brings together Tina Bui, Ethan Campbell, Joshua Lincoln and Tyson Russel to bring the escapees in.

Angela enters the file room and finds Jordan Matthews examining some files. She tells him that she has a very important assignment to give him and Jordan stops her and tells her he accepts. He tells her that he has already seen what the mission is and believes he can handle it. Angela smiles and places a business card in his hand before leaving the room.

Angela talks with Joshua about his next assignment. When asked if he will be paired with Tina, Angela replies that he now has his own partner, and introduces him to Alan Carter. Later, Tina approaches Angela with some information regarding the end of the world. Angela replies that she has had a rather bad day but Tina demands the truth. Angela reveals that she sent Jordan on a mission to Pinehearst in order to change the future but to do that, he must endure horrible torture. Tina looks shocked and Angela simply pulls out a file and begins to read. Tina leaves, outraged.

Angela's future is seen by Jordan.

Angela remains in her induced coma and is visited by Tina. Tina accuses Angela of creating a big mess within Primatech and tells her that she is going to fix it.

Angela, awakened from her coma, opens a file and makes a call to Tina. Emily Rose answers the phone and Angela tells her that she can learn to control "Lily", Emily's other self.

Angela stands outside the still burning Hartsdale Facility. She is joined by Tina, Jordan, Joshua, Elisa and Tyson. Angela reveals that she is shutting down the Company and fires all her agents, handing Tina, Jordan, Elisa and Tyson each a special envelope. Joshua receives none as Angela claims his work was only temporary. Asking Tina for her help, Angela, a man named Carlos and Tina travel to the ruins of Pinehearst and capture the last surviving marine.