Below is an episode by episode recount of Tina Bui's history in the Chronicles universe. 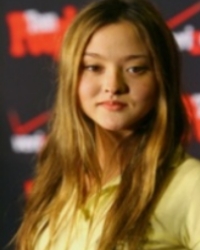 Tina, as she appears in Season One

Inside a Company training room, Tina kicks a large man into the air, knocking him out . She turns and walks past a wall where two men are standing. She lists their names and abilities before asking them what the first rule every good agent must follow is. Ethan answers the question and Tina smiles at him, touches his chest and yells that he is wrong. Using her strength, Tina throws Ethan across the room. She then turns to Joshua and tells him that a good agent must remember that their targets are the same as they are, "different". She tells Joshua to go to his room because his training session is over. As he leaves, Tina turns back to Ethan with an angry look on her face.

Angela Petrelli later views security footage of Tina in her car, screaming at Ethan to start her car. Using his ability, Ethan starts the car. Tina is later chosen to be one of the agents who will be sent after two recently spotted escaped detainees.

In Primatech Research, Tina gives agents, Joshua Lincoln, Ethan Campbell and Tyson Russel a debriefing on their two targets, including information on their abilities and background stories. Tina asks them if they are ready and all agents agree to join the mission.

Arriving at Central Park, Tina and the others find several people who appear to have fallen under the influence of Nicholas' touch. The group decide to split into pairs to locate their targets and Tina agrees to go with Tyson. Searching an area of the park, Tina and Tyson come across a badly beaten couple. Tyson comes to the conclusion that the more sanity Nicholas absorbs, the stronger he gets. Tina reassures Tyson that no matter what she is stronger. Nicholas then jumps in front of the agents and takes a hold of Tyson. Tina reacts quickly to this and pucnhes Nicholas, sending him flying through the air. Nicholas recovers quickly and uses amazing speed to catch up to Tina. He uses enhanced strength to attack her and Tina is eventually knocked out after being kicked into the air and slamming hard into the floor.

Tina stands while Angela talks with Joshua about his next assignment. Later, Tina is doing her routine inspections when she comes across a gallery devoted to the work of Isaac Mendez. She wanders through it, fascinated by the prophetic images. She finally comes to the end of the gallery and finds a painting depicting the world splitting in half. Angry, she rushes to meet Angela and confronts her on the topic. Angela reveals that the mission Jordan is on will change the future but in order to do so, the agent must endure brutal torture. Tina is left shocked by this declaration.

Tina's future is seen by Jordan.

During Angela's coma, Tina is put in charge of Primatech. She authorizes a mission to rescue Jordan and then goes to Angela's bedside. She informs Angela of the changes she plans to make in order to fix the wrongs that she has done. Tina receives a phone call from Lois, a former Primatech agent, and is shocked to discover that Angela placed her as a mole inside of Pinehearst. When Lois asks for help, Tina hangs up the phone and stares at Angela angrily.

Tina manages to hack in to Angela's files and discovers that the final mission Angela authorized was one involving Joshua and Alan. Tina looks at the file and learns that they were sent after the last Level 5 Escapee, Emily Rose. Tina grabs a gun and rushes to help.

Tina drives to an unknown location, constantly checking the time on her watch. As she is driving, she looks at the eclipse and then calls Tyson, informing him about the situation with Emily.

Via Emily's flashbacks, it is revealed that five years ago Tina and Tyson captured Emily and locked her up in Level 2. Tina visited Emily a few years later and informed her that the Company had stopped researching for a cure. Angry, Emily kills Tina's partner and she is placed on Level 5. In present time, with the eclipse nearly finished, Tina pulls over and pulls out Emily's folder. She tells Emily to hold on and then continues to drive.

Tina arrives at the warehouse just in the nick of time. She distracts Emily, who uses her power to fling Tina backwards. Tina tries to reach out to Emily and attempts to get her to control her power. Emily yells that she does not want to control it and is tackled by Joshua. Tina tries to sedate Emily but is killed when Emily reaches up and removes her soul.

Emily returns to her kind and caring self and is shocked at what she has done. She revives Tina, who thanks her for saving her life. Tina tells her that she must go back to Level 5, which angers Emily. The two women stand and when Tyson enters, firing his tazer, Emily pulls Tina into its path. Tina is tazered and knocked unconscious. She awakens sometime later, seconds after Joshua has stopped Tyson's bullet from killing Emily. Knowing that Emily must die, Tina tazers Joshua, who is forced to release the bullet. Emily destroys herself before the bullet hits, sending every agent blasting into the walls.

Tina doubts that Emily is really dead and Jordan reminds Tina that Emily was not a monster, just a poor girl who was cursed with a horrific power. Tina and the others mourn for the loss of their friends and then decide to return to Primatech after Jordan reveals that it has been destroyed. The agents return to Angela, who hands Tina, Tyson, Jordan and Elisa their severance pay. She thanks them all for their years of work and then asks Tina to perform one last mission for her.

After completing this mission, Tina manages to find Joshua wandering through the streets. She approaches him and tries to get him to feel better about the deaths of Emily and Ethan. She informs him that she is going home to China and that he should try and get back to the life that he had before the Company. She hugs him and then leaves for the airport.