Outside of Pinehearst, Tyson steps out of a van. He looks around and calls out to his other agents. Ethan, Elisa and Tom exit the van. Elisa pats Tyson on the shoulder, telling him not to worry. Tyson looks at the building with a troubled look on his face and tells his team to start the rescue.

In Jordan’s cell, Jordan is strapped tightly to a chair and is gagged. Lois is watching him and shakes her head disapprovingly. She exits the room and picks up a phone, asking to speak with Mr Petrelli. A few seconds later, Lois tries to get Mr Petrelli to authorize Jordan’s release. Her attempts fail and she hangs up, furious. She enters the cell once more and removes Jordan’s gag. She tells him that she never wanted any of this to happen and that she is sorry for what must happen. Jordan asks her what she means and she explains that Arthur gave her another mission: kill him.

Tyson, Ethan, Elisa and Tom rush through the halls of Pinehearst. An agent leaves a room and, after trying to shout a warning to his fellow agents, is shot dead by Tyson. Tyson urges the team to keep moving and they run into another hall. At the end of the hall, several agents are waiting for them with guns. The men take cover while Elisa runs towards them. As they shoot at her, she dematerializes into a large puddle of water that crashes onto the ground. Elisa expands herself, creating a massive wave that pushes the agents back. After they hit the wall, Elisa rematerializes and tasers them. Ethan runs up behind her and tells her that Tyson knows where Jordan is.

In Primatech, Tina is sitting beside the bed of Angela Petrelli. She reveals that she has been put in charge while Angela is “asleep” and that she has been trying to fix the mess that Angela has made. Tina’s phone rings and she answers it. She is shocked to hear the voice on the other end.

Lois pleads with Tina to send help, as she does not know what to do. Tina informs her that Angela never told anyone that Lois was put in as a spy and that she has already sent a team to bring Jordan back. Lois is relieved and asks whether or not she can come back too. Tina looks at Angela and hangs up the phone.

Lois hangs up the phone and turns around to face Jordan. Jordan asks what is going on and Lois explains that she was recruited to Pinehearst after Angela sent her to be a mole. Jordan is outraged that Lois did not tell him sooner and she quickly apologizes. She unties Jordan and tells him that other agents are on their way to rescue him. Jordan focuses on Tyson, and is able to see him running through the halls. Jordan thanks Lois for her help and leaves.

Tyson steps over the incapacitated Pinehearst agents and steps into the file room. Elisa asks where Jordan is and Tyson tells her to wait. A few seconds later, Jordan races into the room and the agents reunite. Ethan tells them that it is time to go and Tom loads his gun. Gunshots are fired and Tom falls to the floor, dead. The agents turn to face his attacker; Lois.

Jordan is confused and asks why she did that. Lois generates a beam of energy and sends it flying into Ethan. Ethan screams and falls to the floor. He continuously lets out powerful blasts of energy that send the others flying away. Lois prepares another amplifier beam but is stopped when Tyson tackles her. Jordan and Elisa manage to get close enough to Ethan to knock him out. Lois screams for help and Jordan demands to know whose side she is really on. She smiles and tells him that Pinehearst was the only place that ever fully understood her and that Primatech is nothing compared to the world that Arthur dreams of creating. Tyson raises his gun and shoots Lois twice in the chest.

Tina searches through Primatech’s files and learns that Angela recently sent Joshua and Alan on a mission to bring back the final Level 5 escapee. She brings up the file on the escapee, Emily Rose, and gasps in shock. She grabs a gun and rushes out of the room. 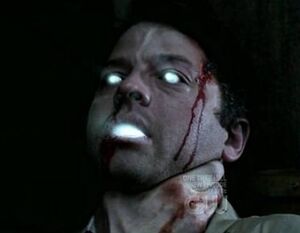 Somewhere in Boston, Joshua and Alan wake up. They are tied to chairs and both have been badly beaten. Joshua looks around and sees the dead bodies of over twelve agents. A voice tells them to be afraid and Alan asks Joshua if he can still use his powers. Joshua manages to telekinetically cut their ropes and Alan rushes over to the nearest body. Joshua tells him that the agent is dead but Alan stands, now holding a gun. Suddenly, from the darkness, Emily Rose jumps out and grabs Alan by the throat. Alan’s eyes begin to shine and a white energy is ripped out of him. Alan falls to the floor, dead, and Emily turns to Joshua. Joshua raises his hand but nothing happens.

Tyson helps Jordan support the unconscious Ethan as Elisa takes Lois’ gun. Suddenly, agents surround the room and Elisa attempts to dematerialize. When she realizes that she can’t, everyone looks through a window. At the same time, Joshua and Emily both turn to face a window, which shows an eclipse covering the sun.

"I'm sorry about what I have to do"

"Wow. That was amazing!"

"Is my hair alright?"

"You have seriously f'd things up around here Angela."

"You should be afraid. I'm a monster."