Below is an episode by episode recount of Joshua Lincoln's history in the Chronicles universe. 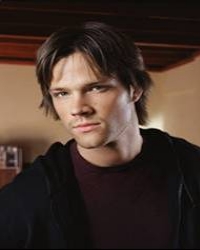 Joshua, as he appears in Season One

Joshua packs his stuff, desperately trying to get as much as he can into his suitcase. There is a loud knock on the door, which frigtens Joshua. He answers it and two FBI agents greet him. They ask if they can come inside and Joshua, suspicious, asks what they want. They insist on coming inside and as one of them draws a weapon, Joshua pushes them back telekinetically. He runs through his house but stops dead in his tracks as a woman materializes from a small puddle of water. Quickly, Joshua grabs her hand and a flash of light escapes them. Elisa falls back, stunned. Suddenly, the agents reappear and shoot at Joshua. Fortunately, as soon as the bullets hit him, they become water. Joshua dematerializes into the floor, escaping.

Later, at a park, Joshua calls himself a freak and turns to leave. The agents reappear and Joshua is unable to stop them from capturing him. One week later, Jordan visits Joshua in his cell and explains that things are changing. Joshua asks what he means and an alarm sounds. Jordan tells Joshua to be ready and leaves. Several escaped prisoners run by Joshua's cell and Joshua hears people screaming in terror.

Joshua meets with Angela Petrelli in her office and listens as she tells him about the Level 5 Breakout. She asks him if he would like to become an agent and Joshua agrees. 3 days later, Joshua trains with Tina Bui and Ethan Campbell in a training room. Tina easily subdues a large man and goes on to ask some questions to the two recruits. Ethan gets his question wrong and Tina hurls him across the room, amazing Joshua. She tells Joshua the right answer and tells him to go back to his room.

While walking, Joshua comes across Tyson Russel, who apologizes for capturing him. Joshua asks how Tyson knew that he was hiding at the park and Tyson explains that his partner has the ability to locate people. Joshua learns a little more about Tyson's past and then continues walking to his room. Later, he is called back into Angela's office and given his first mission.

In Primatech, Joshua listens to Tina's debriefing on their new targets. When her speech is done, Tyson stands and announces that the team is ready. The team goes to Central Park and find numerous people who appear to have been affected by Nicholas Sawe's ability. Tyson proposes that they split up into two teams so Tina and him go together while Ethan is paired with Joshua. The duo search the area around a fountain and, after seeing Ethan generate some energy, Joshua duplicates Ethan's power. Ethan is annoyed about this but his attention is soon drawn to the fountain. He destroys it after hearing a noise and Joshua is surprised when Vickie Palamino steps out and offers to help them. While Ethan is suspicious, Joshua convinces him that they can trust her, at least until the mission is over.

Vickie, Ethan and Joshua search the park for Nicholas, Tina and Tyson, eventually finding them fighting. Vickie sends a shockwave towards Nicholas, catching him off guard. Joshua uses his Water Mimicry and Telekinesis to attack Nicholas, who becomes so enraged that he kills Vickie. Joshua then begins to charge a shockwave, showing that he duplicated Vickie's power. Before Nicholas can reach him, Joshua unleashes the shockwave, killing the villain.

Joshua sits with Angela, who is happy with the work he did in Central Park. She gives him his next assignment and informs him that he now has his own partner, Alan Carter.

Joshua and Alan break into the home of Ricardo Silva and Alan senses that Joshua isn't entirely happy with a "normal" partner. Joshua insists that he is and Alan reveals that his last partner, Dylan Tyler, died in Korea. Before Joshua can say anything, he notices that Ricardo is coming and alerts Alan. Alan charges for the door, yelling out Ricardo's nickname of Red Eye. Joshua is shocked and, after Ricardo uses his power, Joshua is forced to attack both the men with telekinesis. He is quickly subdued by Anna and her power. After awakening, Joshua follows Anna's tips and escapes. He attempts to recapture the targets with Elisa, but is once again knocked out by Anna.

Joshua's future is seen by Jordan.

Joshua and Alan wake up in a dark warehouse tied to some chairs. Both are badly beaten and bleeding. Alan asks Joshua if he can still use his powers but Joshua hardly notices, as his attention is fixed on the numerous dead bodies around them. A voice calls out that they should be afraid and Joshua quickly telekinetically cuts their ropes. Alan grabs a gun but before he can use it he is attacked by Emily Rose, who uses her power to rip Alan's soul out. Joshua, too shocked to move, stares in horror at his friend's corpse. Emily approaches Joshua, who attempts to use a power. After discovering that their powers are gone, both Emily and Joshua look out a window at the new eclipse.

Joshua is shocked when his target, Emily Rose, decides to kill herself after the eclipse removes her abilities. She begins to cry and Joshua awkwardly comforts her, asking if she is alright. Emily reveals some details about her power and how she has become a monster, making Joshua feel sorry for her. Joshua offers to take Emily to Pinehearst to have her ability completely removed but Emily fears that it is too dangerous for him, as she might kill him.

Emily warns Joshua that once her powers return, an alternate personality will take over her but he still refuses to leave her side. When the eclipse begins to end, Joshua sees that Emily is trying to help him so he attempts to escape. However, the door is locked and Joshua turns to see a repowered Emily smiling at him. She is holding the key in her hand and she then begins to take Joshua's soul.

Joshua uses his telekinesis to stop Emily's attack. He tries to escape by breaking open the door but Emily stops him with her power, saying that she can control his body. She once again tries to remove his soul but is stopped by Tina, who distracts Emily long enough for Joshua to dematerialize and tackle her. This doesn't stop Emily for long and she quickly recovers and removes Tina's soul, much to Joshua's horror. Joshua manages to get Emily to revert back to her kind and caring self and is relieved to see that Emily can reverse the process of her soul removal.

Emily soon reverts back to her evil self and tricks Tyson into tazering Tina. Joshua, Elisa, Jordan, Ethan and Tyson all try to stop the villain but all fail. After Emily kills Ethan and incapacitates Elisa and Jordan, Joshua and Tyson are both tortured by Emily and her power. When a chance opens up, Tyson tries to shoot Emily but Joshua stops the bullet in an effort to save Emily's life. Before Tina is able to make Joshua release the bullet, Emily gives up her life and destroys herself, sending Joshua and the others flying across the warehouse.

Joshua is distraught over the deaths of Emily and Ethan and goes with the survivors to the ruins of the Hartsdale building. They meet with Angela Petrelli, who tells them all that Primatech is finished. She hands Jordan and the others their severence pay and tells Joshua that he was nothing more than an instrument to capture the Level 5 escapees. Joshua, devastated that his life is ruined and that he has become a killer, leaves the Company behind and begins wandering the city.

As he is walking, Joshua randomly generates energy, which attracts the attention of Tina. Tina comforts Joshua and tells him that he should return home to Boston. Joshua does not listen to her advice and checks himself into a hotel in New York, still depressed over the deaths of Ethan and Emily.