Below is an episode by episode recount of Elisa Douglas' history in the Chronicles universe. 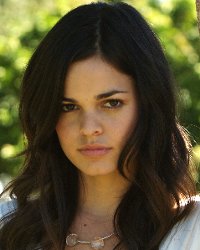 Elisa, as she appears in Season One

Outside of Joshua Lincoln's home, Elisa talks with Jordan Matthews about the mission. She learns that Joshua has only recently manifested and that he is just scared and confused. Elisa signals the other agents, prompting the mission to begin.

As Joshua runs from the agents in his house, Elisa materializes in front of him. Shocked, he grabs her hand and a brief flash of light escapes them. Stunned and weakened by the process of Joshua's power, Elisa falls back on the floor. She watches as the other agents shoot at Joshua and is shocked to see that as soon as the bullets touch him, they become water. Joshua smiles at Elisa and thanks her for the ability before dematerializing into the floor, escaping. Jordan enters the room and sheds some light on Joshua's ability. He locates Joshua using his clairvoyance and the team moves out to catch him.

Later, in the park, Elisa materializes once more following an attack on Joshua. While he is on the floor, Elisa injects him with a sedative.

Elisa arrives to try and prevent the escape of Ricardo Silva and Anna Korolenko. She successfully subdues Ricardo but is rendered unconscious by Anna's ability.

Elisa exits a van outside of the Pinehearst building. Standing beside her are Ethan, Tyson and her partner Tom. The group enter the building and after being confronted by some enemy agents, Elisa dematerializes into a wave of water, crashing into the agents. Elisa then reforms and tazers the soaked agents, subdueing all of them.

Once Elisa and the others are reunited with Jordan, they prepare to leave but are stopped by Lois Freeman, who shoots Tom dead. Lois then uses her ability to overcharge Ethan's energy powers. As Ethan screams in pain, he releases uncontrolled blasts of energy. Elisa and Jordan manage to quickly knock him out though and Tyson shoots Lois twice in the chest. Elisa takes Lois' gun and continues to flee Pinehearst with Tyson and Jordan, who are now supporting Ethan. On their way out, the group are confronted by more agents and Elisa finds that she is unable to access her abilities. Outside Pinehearst, an eclipse is occuring.

Still powerless within Pinehearst, Elisa, Jordan and Tyson escape a hoard of Pinehearst agents while supporting an unconscious Ethan. After making it all the way to the main entrance, Elisa and the others discover that there is no one blocking their escape, causing the agents to become suspicious.

Emily, Tyson, Jordan and Ethan rush to aid Joshua and Tina in their fight against Emily. On the way, Elisa expresses her worry about Tina and Joshua's safety and learns that Emily has already killed Tina. Shocked by this information, Elisa is quickly comforted when Jordan tells her that Tina is not gone, as she is still "around".

Elisa and the others arrive at the warehouse and begin attacking Emily. After Emily kills Ethan, Elisa dematerializes and expands herself, smashing into Emily as a mini wave. Emily uses her gun to beat Elisa in the side of the head, knocking her out.

In the aftermath of Emily's death, Elisa and her fellow agents pay their respects to their fallen comrades, Ethan and Alan. When Jordan reveals that Primatech has burnt to the ground, Elisa is worried that the entire Company has shut down. Her fears are confirmed when the agents return to Angela and learn that they are fired. Elisa, Joran and Tyson go to a bar and start drinking to make themselves feel better. When she feels like it is time for her to leave, Elisa asks Tyson about "Santiago". Tyson reveals that he is still in Peru and Elisa leaves to find him.

Months later, Jordan has a postcard from Elisa, showing that she is in Peru.