In the warehouse, Joshua backs away from Emily as she advances on him. She demands to know what he did to take away her powers and Joshua tells her that he doesn’t know. Angry, Emily stops moving and stares at him. Joshua asks her what she is going to do. Emily becomes calm and says that she is going to kill herself.

Tina is driving and checks her watch. She notes the time and looks up at the eclipse, which has darkened the entire city.

Emily sits with Joshua and buries her face in her hands. She begins to cry and Joshua awkwardly asks her if she is alright. Emily looks at him with tearful eyes and asks if he really cares or not. Joshua doesn’t answer and Emily brushes away her tears. She explains that her ability is horrible and that with it, she is a monster. She goes on to explain that the souls she takes are the only sustenance that will feed her, everything else she tastes turns to ash in her mouth. She says that the souls she takes never fully satisfy her hunger and that she will never be able to stop killing. Joshua tells her that she doesn’t seem so bad now and she smiles, saying that for the first time in ten years she is no longer hungry. Five years ago, Emily sits with her parents. All three are watching a news report about strange killings that have occurred in the neighbourhood. Emily’s mother watches her suspiciously and Emily declares that she had nothing to do with it. Emily’s father tells her that they were visited by some people who think that she is dangerous. Emily, furious, screams that she’s normal and walks away, up to her room. Tina and Tyson enter the living room and Emily’s mother tells them that she is upstairs.

Somewhere in Pinehearst, Tyson, Elisa, Jordan and the newly awakened Ethan are hiding. Elisa wonders why their powers are gone and Jordan speculates that it is because of the eclipse. Tyson’s phone buzzes and he answers it quickly. On the other end, Tina demands to know why he is taking so long rescuing Jordan. Tyson quickly explains his situation to her and Tina sighs in frustration. She tells him that Joshua and Alan have gone after Emily and Tyson hangs up his phone, telling the others that they must leave immediately.

Joshua continues to sit with Emily, who is contemplating using Alan’s gun to shoot herself. Joshua asks her why she never killed herself before she was captured and Emily explains that she does not want to die. Five years ago, in her room, Emily plays with a raccoon. A tear rolls down her face and she grips the animal tightly, sucking out its soul. The raccoon squeals and then dies. Crying, Emily throws the corpse out her window and buries her face in her pillow. Her door is kicked down and Tyson enters with Tina. Emily gets up and Tyson warns her not to move. Emily claims that she never wanted to hurt anyone and that she just wants the hunger to stop. Tina holds her and tells her that they will help.

In present time, Joshua carefully takes the gun from Emily’s hands and throws it across the room. Emily asks what he is doing and he tells her that without her powers, she is a good person. He tells her that a Company named Pinehearst has found a way to remove abilities and that he will take her there. Emily tells him that it is too dangerous, because if her powers return she will not be able to control herself. 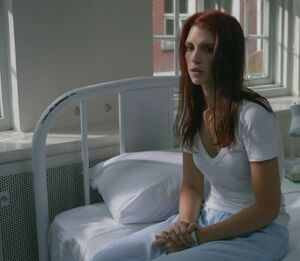 Emily is kept in Level 2.

Three years ago, in Level 2, Emily sits in a cell. She finishes reading a book and places it on her table. Tina enters the cell with another agent and asks her how she is going. Emily confesses that she had hoped her power would be gone by now but Tina tells her that research into the cure has been stopped. Emily is shocked and asks if there is anything Tina can do to help. Tina looks sad and tells Emily that with no hope for a cure, they must transfer her to Level 5. Emily asks if she thinks she is a monster and Tina quickly says no. Emily’s eyes begin to shine white and she approaches Tina, saying that she is lying. Tina’s partner steps forward but Emily begins to choke him, sucking out his soul while doing so. Tina punches Emily, sending her flying into a wall. Pulling out a needle, Tina apologizes and sedates her.

Tyson, Elisa, Jordan and Ethan run through the halls of Pinehearst. Elisa asks Jordan if anything looks familiar and he says that Maury only showed him one entrance. Tyson stops the group and pulls out his gun. Walking slowly, he sneaks to the end of the hall and peers out into the corridor. Ethan asks what he is doing and Tyson tells him to shut up. Moments later, Tyson turns and shoots behind Elisa. An agent who had just sneaked up behind her falls to the floor, dead. Elisa, Jordan and Ethan are all shocked and Tyson smiles, asking if they thought “normal” agents were just there to make them look good.

In Level 5, Emily screams that she wants food. Tyson visits her and asks if the meat is doing anything to stop her hunger. Emily tells him that she needs a soul but Tyson tells her that there is no way he is going to let her get anywhere near another soul. Emily steps up to the window and puts her face close to Tyson’s. She tells him that one day soon, he will be her first meal. While pacing the room, Emily explains to Joshua that her power changes her. She says that when her hunger intensifies, a different personality emerges. She tells him that it is stronger that she is and can suck souls from people without touching them. Joshua tells her that he read in her report that she killed three agents while still in her cell. Emily begins to cry once more and tells him that he needs to kill her before she becomes a monster again. Joshua tells her that she can control her hunger but she says that after being locked away for five years, her other self has become much stronger and that once her powers return, she will disappear. Joshua reassures her that he will not let that happen but Emily yells that he doesn’t have much time. She points out that the eclipse is nearly over and that he should run. Joshua tells her that he is not going anywhere and Emily looks confused.

Jordan points out the door leading to the main entrance of Pinehearst and Tyson informs everyone that while the agents will most likely not attack them out in the open, they should be prepared. He hands Jordan his gun and tells them that if he is stopped, they need to find Tina. He steps out into the main entrance and finds that it is nearly completely deserted. The others step up behind him and they wonder what could be going on.

Tina pulls over on the side of the road and once again checks her watch. She looks back up at the eclipse and tells herself that it is nearly over. She pulls out Emily’s folder and tells her to hold on.

In the warehouse, Emily is huddled in a corner and is shaking uncontrollably. Joshua attempts to help her but she screams for him to get away. Her eyes briefly shine white but she closes them tightly, shutting them off. Joshua backs away and Emily screams once more. Joshua looks out the window and sees that in only a few seconds, the eclipse will be over.

While in Level 5, Emily is huddled in her corner and is shaking. Suddenly, the power goes out and Emily’s cell opens. She looks up and smiles. Slowly, Emily leaves her cell and then runs out into the halls. Several agents attempt to stop her but she grabs all of them, sucking out their souls. With her hunger temporarily satisfied, Emily looks around and then runs for an exit.

Joshua runs for the door but finds that it is locked. He looks back at Emily, who is now standing. She is dangling the key from her finger and she tells him that she locked it after Alan and him entered. Joshua attempts to use one of his powers but Emily raises her hand. Joshua’s eyes begin to shine white and he falls to the ground, slowly losing his soul.

"Why haven't you killed yourself before this?"