Lois Freeman enters a cell in the Pinehearst building along with Maury Parkman. Inside the cell, chained to his chair is their prisoner, Jordan Matthews. Lois expresses her disdain at keeping Jordan prisoner but Maury firmly states that Mr. Petrelli doesn’t want anything to stand in his way. Lois asks what he wants her to do to him and Maury tells her to charge him up. Jordan, barely conscious, attempts to reason with Lois but she shushes him, places her hand on his cheek, and quickly pulls away. Jordan then raises his hand and sees red energy flowing and escaping through his body. He is then flung back as his Foresight power manifests.

In the year 2011, Angela Petrelli sits behind her desk at Primatech headquarters, now located in Los Angeles. In front of her Agents Meredith Gordon and Tina Bui are briefing her on a recent outbreak of criminal activity related to abilities. Angela dismisses the problem and tells her agents that the world no longer needs their help. She looks out of her window and smiles sadly as several people fly by.

At Pinehearst, a woman named Mary Griffin is talking to Elle Bishop about her recent divorce. Elle shrugs it off; stating the only difference in the relationship is they now have to share Noah. Mary gasps as the t.v shows a report on the recent destruction of Costa Verde and the deaths of every inhabitant. Elle turns and sees this and falls to the floor, stating that now there is no difference. She then breaks down in tears while being comforted by Mary.

In present time, Lois asks Maury what Jordan is seeing. Maury focuses on Jordan’s mind and states that he is seeing exactly what Mr. Petrelli needs him to.

Back in 2011, Elle and Mary receive orders to remain at Pinehearst until further instructions. Elle angrily asks why and her superior tells her that Mr. Petrelli has had a vision that Primatech will attempt one last attack before finally being destroyed. Mary agrees to stay but Elle does not, claiming that Pinehearst can destroy the Company without her. Mary pleads with her to stay but Elle shrugs her off and tells her that she no longer has anything to stay for and leaves.

In Primatech, Angela walks through the corridors with some files in her hands. She places them in the garbage and turns around to see the two dead bodies of Meredith and Tina. Angela closes her eyes and turns again, this time seeing her office just a few metres away from her. Angela moves faster in an attempt to reach her office but is grabbed from behind by Sylar. Angela awakens from her dream and picks up the phone with a trembling hand. In present time, Jordan’s ability stops and he expresses his pain to Lois. Lois tells Maury that they have to stop but Maury tells Lois that Mr. Petrelli needs to know more. Sighing, Lois once again charges Jordan, who screams in pain as his ability is amplified.

In 2011, Angela picks up some files and walks down a hallway. She smiles as she comes across a garbage bin and places them inside. She then turns to one side and after not seeing anything, continues to walk to her office. As she is doing this, Sylar behind her and grabs her. Angela welcomes her son but he tells her that he is no longer her son. He throws her against a wall and gestures at her head.

Outside of Pinehearst, Meredith and Tina are in a car discussing “their last mission”. Tina asks her if she is worried she will have to hurt Claire but Meredith tells her that she chose her side. The women then proceed to exit the car and enter the building. Inside, Mary approaches them, generating a blue flame in her hand. Meredith tells Tina to run and she ignites her own flame and throws it at Mary. Tina runs the hall and narrowly misses a blast of electricity fired by Joshua Lincoln. Tina pulls out her gun and Joshua mocks her on the loss of her ability. She fires the gun and Joshua dies. 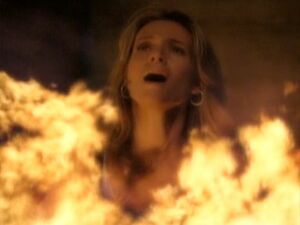 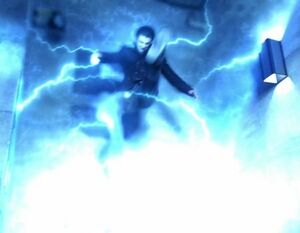 In Primatech, Elle comes across Angela’s body and notes that Gabriel did it. She turns and bumps into Sylar who addresses her as “honey”. Elle begs him not to return to his old ways in respect to Noah. Sylar grins at her and whispers that it is too late and throws her across the hall. Elle attempts to generate some electricity but Sylar stops her and tells her that he still cares for her and will not kill her. Elle tells him that they would never work, and in one last heroic act, she unleashes all of her electricity, resulting in a massive explosion that destroys the facility and at least half of L.A.

Meredith and Mary continue to battle each other with their flames while Tina attempts to hold off other agents with her gun. Mary advances on Meredith and taunts her. Meredith, angry, produces more flames and overpowers Mary. Knowing that fire will not kill her, she pulls out her own gun and shoots her twice in the head. Mary falls to the floor and Tina applauds Meredith’s victory. Suddenly Lois Freeman grabs Meredith and amplifies her power. Overwhelmed by her ability, Meredith explodes in a mass of flames, destroying both her and the Pinehearst facility.

Jordan is pulled out of the vision by Maury, who thanks him and states that because of him, Mr. Petrelli knows everything he needs to know for the upcoming war. Jordan asks what he means and Maury claims that Mr. Petrelli knows that no matter what, Primatech must and will be destroyed.

"The world no longer needs our help"

- Future Angela Petrelli to her agents.

"How do you feel now that your divorced?"

"The same as I did when I was married, alone and angry"

"I don't have anything left to stay for"

"How does it feel? Not to be strong? To be weak and powerless?"