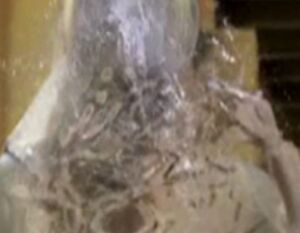 In Lima, Peru, Elisa is wandering through the crowded market place. She picks up an apple and the vendor asks if she is going to pay for it. Elisa hands the person some money but leaves the apple. As she is walking, she notices a large van parked at the end of the street. Suspicious, Elisa turns and walks the other way. When she reaches the market place, she sees the vendor speaking with a woman. The vendor spots Elisa and points at her. Elisa then begins to run. She runs down the street but is quickly surrounded by a group of armed men. They aim at her but she spirals into a water puddle to escape them. When she materializes several metres away, she prepares to run but stops when she sees that the woman from earlier has a gun to Iris’s head. Elisa is tazered from behind and the woman smiles.

In Boston, Joshua is working at the Oakwood Retirement home. As he is handing out medication to some of the residents, a college student named Evan Winston approaches him with his camera raised high. He begins to give commentary to everything Joshua does, prompting Joshua to yell at him. Evan complains that Joshua has no creativity and that he needs to open up his mind for the unbelievable, namely, a documentary about “some loser nurse”. Joshua sighs and gets back to work.

In an unknown facility, Danko is speaking with Nathan Petrelli. Nathan suggests letting the prisoners speak with each other, to show them that they mean no harm. Danko is hesitant, as he believes that they will only conspire to overthrow them. Nathan insists that the prisoners are not bad people but Danko throws down a few files. He begins reading out information about someone who removed all of the water from a lake and somehow moved it into a local hospital, someone who removed all conscious activity from everyone within Central Park and someone who massacred an entire country town just by thinking about it. Danko states that the threat is real and that their prisoners are evil. Nathan looks upset and Danko tells him to cheer up, as he will be recognized as a hero for alerting the government to the menace.

In Beijing, China, Tina Bui opens her door and then gives a big hug to Tyson, who has come to visit. He introduces her to his “fiancée”, Olivia Stabler. Tina is surprised that Tyson is engaged and asks him why he never mentioned it. Tyson tells her that it was sort of spontaneous and Tina nods. She and Olivia begin to talk and Tina explains that she moved back to China to reconnect with her family. Olivia comments that she has a nice home and Tina tells her that it is the family palace. Tyson asks Tina if she has anything to drink and Tina goes to the liquor cabinet. Through the reflection on the glass, she sees Olivia pull out a gun. Tyson quickly shakes his head and Olivia places it back in its holster. Tina then says that she needs to get another glass and disappears into the kitchen. She returns a second later, holding a glass. Then, she hurls it at Olivia, smashing it on the side of her face. Tina runs for the door, but armed agents smash through it and tazer her.

In Los Angeles, Jennifer Lehane is sitting in a bar with a bunch of other people. One of the girls reassures her that she will have definitely landed the role. The people inside the bar become silent as a man steps onto the stage with a piece of paper. He reads out the roles, none of which Jennifer lands. She sighs and her “friend” teases her, saying that maybe her twenty-fourth time will be the charm. Jennifer leaves, crying, and as she steps outside the bar she becomes even more frustrated, as it is pouring down with rain. She tries to walk through it, ignoring the deafening sound of the rain on the roofs. She screams in pain as, from behind her, a man tazers her.

Back at the nursery home, Joshua is writing reports when he notices a man speaking with an elderly lady. He ignores it and gets back to writing. Evan sneaks up on him, once again commentating. Joshua becomes annoyed and yells for Evan to get out of the home. Evan protests but Joshua lifts him high into the air as a threat. Evan goes running and Joshua sits back down. He looks around and sees that several people are shaking their heads disapprovingly. Annoyed, Joshua heads out to the car park. He spots Evan walking and calls out to him. Evan turns but is then tazered by a group of government agents. Joshua yells for them to stop and telekinetically throws them away. The men yell that Joshua is “one of them” and Danko, the man from inside the home, arrives. He tazers Joshua in the back of the neck and then pushes him hard onto the ground. He tells his team to pack the monsters into the truck and then leaves.

Some time later, at an unknown location in Washington, Jennifer is thrown into a cell. She yells that she wants a lawyer and a guard yells for her to shut up. Jennifer sits down and begins to cry. A voice asks her if she is alright and she looks up, seeing a blindfolded Jordan Matthews. She asks who he is and Jordan introduces himself. Jennifer asks why he has a blindfold on and Jordan explains that it is to stop his power, which works by sight. Jennifer asks what he means by power and Jordan asks if she has one. Jennifer thinks and then silently states that she can “predict the weather”. Jordan is a little surprised and asks if she can do anything… “better”.

Danko gets into his van and finds Noah communicating with the base through some headphones. Noah informs them that "The Hunter" has captured the target and Danko asks to be put through to "Global Vision". An image of the world pops up on the computer screen, with hundreds of tiny red dots scattered around it. Danko informs Noah that their team in London has already captured a group of "freaks" but that they will need backup to get the ones that escaped. Noah says that he will send a team after the prisoners are transferred later that night. Danko agrees to the plan but then sits down. Noah sees that Danko looks worried and asks him what he is thinking about. Danko reveals that he does not like Nathan's plan and would rather execute the targets. Noah tells him that they do not want to start a war but Danko says that they have already started it. 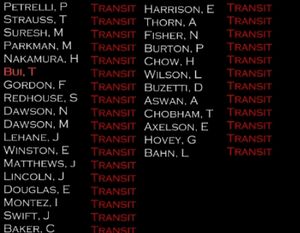 Danko checks on his prisoners.

Still in their cell, Jennifer and Jordan begin to talk. Jennifer tells him that she is trying to make it as an actress but that she isn't getting any roles. Jordan complains that he would have been able to help her if his powers were working. Jennifer laughs and asks why he hasn't simply pulled his blindfold off. She walks over and places her hands on it. Jordan warns her not to do anything but Jennifer pulls and receieves a powerful electrical shock. She holds her burning hand and Jordan tells her that as long as nobody touches it, he will be fine. He then asks her about when she noticed that she had an ability and she admits that it is not a "power" but a "talent". Jordan is confused and Jennifer states that predicting the weather is a parlor trick and not a special ability. Jordan insists that every power is special but Jennifer wonders what she did to make herself so "un-extraordinary". Before Jordan can say anything, the guards enter and pull the two prisoners out.

Danko arrives at the facility and orders his men to prepare the prisoners. Many people are loaded onto Flight 195 and Danko watches somewhat proudly. He goes to a computer console and monitors the prisoners’ heart rates. He asks why Tina’s heart rate is so high and his analyst explains that she is angry. Tyson appears with Olivia and tells Danko that he does not want to ever have to do that again. Danko angrily says that he will do what he is ordered to.

On board the plane, Claire Bennet begins unmasking passengers. She frees Peter Petrelli, who begins to fight with the guards. As Claire goes to the cockpit, Peter is knocked on to Tracy Strauss. He replicates her ability, which is noticed by an unmasked Joshua. Peter is then punched and as he holds the plane wall for support, he involuntarily freezes it. The plane begins to go down and the prisoners hold on for their lives. Joshua looks around and sees Jordan, whose blindfold has fallen off, Tina, Evan and Elisa. As the plane begins to fall, Jordan’s restraints start to come loose…

"You're so ordinary it's kind of insulting. Haven't you ever been remotely remarkable?"

It was kind of spontaneous."

"We spoke three days ago and you didn't mention this."

"It was kind of really spontaneous."

"I can predict the weather."

"Why is Bui's heart rate so high?"

"Trust me Danko. You wouldn't like her when she's angry."