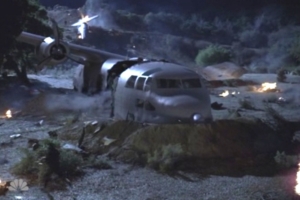 Government agents swarm over the crashed plane, tazering fugitives left and right. Jordan is hiding behind some bushes and declares that he needs help. He attempts to access his clairvoyant abilities but finds himself unable to. Jennifer sneaks up on him and asks him what is going on. Jordan, surprised, admits that he doesn’t know anything anymore. Jennifer asks him what he means and a spotlight shines on them. Jordan grabs Jennifer and the two of them run.

Danko is speaking with three of his agents, Bennet, Russel and Stabler. He tells them that they must do whatever it takes to bring in the prisoners, dead or alive. Danko admits he would prefer the first of the two but is silenced when Nathan Petrelli enters the tent, stating that each prisoner is to be returned alive. Danko argues that Nathan's judgement is clouded due to his daughter being a target. Noah steps in and tells Danko that Claire will not be killed. Olivia attempts to view her opinion but is shunned down as Danko argues back at both Noah and Nathan. He tells them that if Claire gets in the way, then shots will be fired. Danko walks away and Noah looks at Tyson. Tyson assures him that no matter what happens, Claire will be fine, one way or the other.

Later that morning, Elisa continues to run through the mass of bushland surrounding the crash site. She stops for a break and looks around. Elisa quivers as she hears gunfire in the distance and asks herself what is happening. Three agents approach her from behind and tell her to freeze. Elisa closes her eyes as she raises her hands. She turns to face the agents, generating and shooting a blast of water out of thin air. Elisa stares at her hands in amazement as the water smashes into the agents. She starts to run but encounters an entire squad of agents, surrounding her in seconds. An agent pulls out their gun and aims at Elisa. A streak of gold passes by, disarming all of the agents. Santiago stops running and grabs Elisa. The smile at each other before dashing off again.

Joshua waits in the bushes. An agent walks by him and Joshua sends a shockwave at him, knocking the agent out. Elsewhere, Tyson and Olivia discuss the current situation. Olivia mentions that she was not told that she would be hunting innocent people when she was pulled out of the FBI. Tyson asks her if she wishes to return to her old job but Olivia tells him that now that she knows the real threat, she can't go back to her old life. Tyson tries to tell her that some people with abilities are decent people and want to be left alone. Olivia tells him that she can relate to that but also mentions that being left alone only works for so long before "an accident" happens. Tyson asks what she means and Olivia asks if he heard about a "satellite explosion" over New York last November.

Jordan and Jennifer continue to run and soon meet up with a huddled Evan. Evan introduces himself to the “fellow fugitives” and asks if they know a way out. Jordan once again tries to use his clairvoyance but only receives a massive migraine. Jennifer tends to him as Jordan asks what Evan’s power is. Evan tells him that he can see what others can see. Jennifer asks him if he had ever thought of using his power to escape and Evan, mildly hurt by the remark claims that he wouldn’t know who to see through. Jordan tells him to look through a man named Peter Petrelli as he believes that he would of found a way out. Evan focuses and his eyes shine brightly. Evan sees Tracy hiding behind some bushes, then pulls out of his power. Evan states that Peter is still stuck in the bushes with some, “hot blonde chick”.

Tina is running through an open piece of land. Following close behind her is Tyson and Olivia and their squad of agents. They advance on Tina who quickly turns around and grabs Olivia. Tina throws Olivia onto her squad and warns Tyson to step away as she will do worse to him. Tyson attempts to persuade her to turn herself in but Tina throws him into his squad as well, claiming that he is now the enemy.

Joshua, dressed as an agent, guards a captured Claire Bennet as Danko argues with Noah and Nathan over what to do with her. Rachel Mills, another guard, warns Joshua not to let Claire out of his sight. Joshua shrugs the remark off and looks at Claire. He kneels down and holds her shoulder, unknowingly duplicating her ability. Joshua tells Claire that everything will work out for the best and Claire tells him that if he touches her again she will have one of her “monster friends” set him on fire. Rachel giggles a bit and Joshua steps up. In an instant, another woman dashes into the tent, grabs Claire, and dashes off. Rachel, outraged, alerts her bosses. 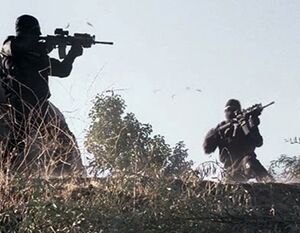 Joshua unwittingly accompanies a team and tracks down Claire and Daphne. Once the team has them in their sights, an agent shoots Daphne in the chest, apparently killing her. Claire steps out and protects her allies by using her body as a shield as, Matt Parkman, struck with anger and grief, uses his ability to force the agents to turn on themselves. Joshua, taken by surprise, is shot in the heart and falls to the floor dead.

Reaching the outskirts of the bushland, Jordan asks Jennifer and Evan if they know where they are going. Evan answers that he was hoping that Jordan would help him. Jennifer agrees and states that she doesn’t know what to do. Jordan takes her hand and tells her that he will protect both her and Evan. The three then continue to run. Not far away from them, Tina exits a small cabin in a fresh change of clothes. She tries to get a signal on the newly stolen phone. She immedietly receives a message and reads it in wonder. The message reads: VIVA LA LIBERTAD! REBEL AND BE SAVED!

In an autopsy room, Joshua’s deceased body is left uncovered as a nurse leaves the room. As she leaves, Joshua’s wound begins to heal and he spits out the bullet. Joshua is shocked at this and looks around. To his shock he finds that one side of his body has been surgically opened. He ends the episode by saying “Oh shi…”

"Umm, I'm still kind of new to this but...why didn't you use your power to find a way out?"

"I've wanted to do that ever since I first met you."

"Who the hell is Rebel?"