Villains, a video series based on Heroes, is created by Hollywood Dropout Productions and presented on the web at MySpace.com. The series began February 1st, 2008, with a two-parter episode of Chapter One (Origins), Volume One (Revelations). Part Two of Chapter One was released on April 4, 2008. The second Chapter is entitled Morally Grey and is due to be released in fall 2008.

Chapter One: Origins (Part One)

Tommy talks to Reid from his cubicle.

A man is on his cell phone walking down a city street talking with his male business partner. He tells his partner he wants out of their insider trading arrangement, which his partner claims could soon net them 150% on their investment. His partner, who is sitting in a cubicle office, asks for him to wait till after the conference like they planned, but he insists on ending things, saying he has counselors breathing down his neck, an upcoming board meeting, and suppliers he can't reach. Just then, he enters a building and the view pans up to note this segment is about Reid Krager of San Diego, California. 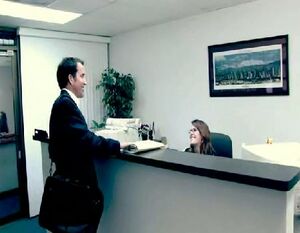 Reid gets a pile of paperwork from Nancy.

Reid enters an office, and walks past a lady receptionist/secretary. He is still on the phone with Tommy and tells him that he can't take it anymore. He doesn't care about the money, just about not getting caught. Tommy says he will talk to River to see what they can do, but that they can't pull out now or they would get caught for sure. Reid comments that he is out of stress pills, and then the receptionist asks for his attention. Reid tells Nancy to wait just a second, and Tommy asks Reid to meet in person to discuss it. Reid replies that he has to get off the phone now, and Tommy suggests for Reid ask her out. Reid says he has to go, that it was nice talking with him, and closes his cell turning it off. Nancy gives Reid a large stack of papers to be signed by the end of the day and tells him that McCallister wants to see him in his office. Reid tries to ask Nancy out but is interrupted mid-question when Nancy's desk phone rings and she takes the call, answering as Yamagato Industries. Reid passes around the corner and hears his heart beat loudly, sees flashes of lights and gets slightly disoriented. A man walks by and he sees white light coming from his chest. A male colleague, Lenny, walks in with no light beaming from his chest, and asks Reid to discuss a client with whom they have a problem. As they walk along, Reid stumbles, the heart pounding noise continues, and he sees more people with white lights in their chests. He eventually collapses and passes out just after a lady assistant asks him to sign some papers for her. 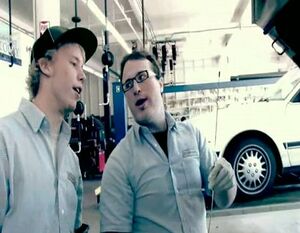 Tony and Dane (left to right) perform an oil check.

At Holmberg Automotive, the view zooms to note this segment is about Dane Barret of Los Angeles, California. Two men are working as mechanics on a car. Looking at the oil stick, they both conclude there's no oil in the car they are working on. Then their boss calls Dane into the head office. Dane takes off his gloves and thrusts them to his partners chest, telling him to make himself useful. His coworker clutches the gloves in pain and Dane enters the auto shop's office. 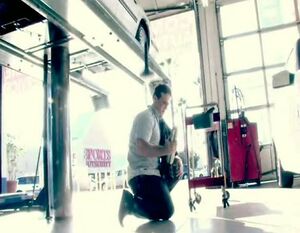 A hammer falls on Dane.

In the office, Dane's boss tells Dane that he has to let him go. Dane glances at the trophy on his bosses desk, which reads "Hollywood Best Boss". Dane's boss says his last paycheck will be ready for pickup at the end of the week, but Dane asks for his boss to mail it to him instead. Upon leaving the office, Dane drops his mechanic's rag such that it covers his boss's trophy. Dane steps back into the mechanic's area and tells his now ex-coworker he was fired, and that his wife left him taking the kids. Dane tells his ex-coworker, Tony, not to worry about it, that he just needs to get a drink. Just then, the boss calls Tony into the office and he leaves. Dane reaches down for a metal thermos and a heavy hammer falls off a nearby car and hits him on the back of the neck where it meets the back. Dane doesn't seem bothered and tells another male mechanic he is alright when he asks, though he notices some marks on the thermos. Dane picks up the thermos and it has scorch-like marks matching the imprint of his hand.

Reid exits a medical building and calls Tommy on his cell phone, who is still in his cubicle office. He tells Tommy he didn't have a heart attack and that he just has too much stress. Reid asks Tommy if he talked to his guys yet, and Tommy asks if he is serious. When Reid tries to restate his thoughts to Tommy, Reid cuts off upon seeing something. Reid pans around and can see white lights emanating from everyone's chests. He also notices a black-haired lady up on the hill across the street who is watching him, so he tells Tommy he has to call him back and closes off his cell phone. The lady notices Reid staring at her and walks away. 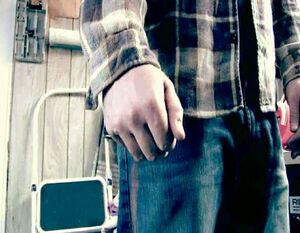 In a home garage, Dane is by himself and stares at the metal thermos with hand-imprint scorch marks, which contain rust. He takes a piece of 2x4 wood and sets it on the top of his working desk. Then he takes a bunch of bolts labeled for 10 pin housing and closes his fist around them. Dane's fist shines with light and the bolts collapse into a pile of rust on the floor. Next, Dane grabs a handful of nails with his fingers and places them first into the piece of wood such that only the tip of each nail is in the wood. Dane then pounds them all the way into the wood using his closed fist.

A van pulls up in front of a bank in New South Wales, Australia. We hear the alarm of the bank go off. One of the bank robbers, Jackson, manages to make it into the van in time. The other one is not so lucky. As Johnny Freeman tries to follow the van on foot he walks into one of the security guards. He runs to the opposite direction of the security guard and hides behind a dumpster in a nearby alley. Unfortunately his actions are caught on tape.He hides behind a trash bin and pulls out an inhaler using it to stop an asthma attack. As Johnny radio's one of his accomplices, Colby, he finds out the area he is in is swarming with police. He finds out the rendezvous point has changed and is on the other side of town. As the police run in on Johnny he radio's out and makes a run for it. While he runs away something extraordinary happens to him. As he runs everything starts to rush by faster then normal. What he doesn't know is that he is moving at super speed. Trying to find out whats happening he is caught off-guard and trips over some garbage on the side walks. As he tries to calm down he finds out he moved all the way from 2nd Avenue to 23rd Street, which normally is a 15 minute drive.

Back in the United States we find Kelly doing a photo shoot alongside Tina and Kim. Hoping for a modeling contract which can set her up for life. She finds out from Ron that it's only between her and Tina. After the photo shoot is over the girls gather to get ready for the party. Tina tries to break the ice and congratulates Kelly, only to get insulted by her ego in return. They start having a discussion involving around Kelly's father's money and his daughter living off of it. Then Tina decides to walk away, telling her that Karma is going to catch up on her one day. But Kelly doesn't believe in karma. As Kelly and Kim leave for home to get ready for the party Kelly's phone rings. She picks up but is not amused by the person calling her. Trying to catch up with Kim she trips over one of the wires, attached to a light from the set, which hits her in the face.

In Australia we find out Johnny made it to the rendezvous point, a multi-story car park on the outskirts of the city, even faster then Colby and Jackson. While waiting he is looking at a business card of some kind. As the van pulls over he quickly puts it away. Colby is confused as to how Johnny got here sooner then them. Johnny and Jackson start arguing about who gets the bigger cut, from the stolen money. After Jackson and Johnny almost get into a fight Jackson decides to leave, telling Johnny to watch his back. Colby asks Johnny how he got to the rendezvous point so fast. He simply replies that he ran. As Johnny packs up his stuff into the van Jackson is greeted by the mysterious woman a view stories below. The woman asks if he is interested in catching Johnny. She tells Jackson that her agency has a special interest in him. Jackson sits down with the woman and asks her how much her "agency" is offering. She replies that Money isn't an issue. He quickly agrees. Jackson has to trap Johnny into a confined space so he can't escape. The woman lures him with a job offering after this is all over. She invites him to come along with her allowing her to show him what her company is all about. While the two walk off Colby appears behind a wall, having overheard everything.

Kelly receives a phone call from the modeling agency. It's Ron. He asks her if she has received the flowers and get well card from the agency. Kelly finds out she is no longer in the running for the contract because of her accident. Her face is burned and her hand is in bandages. It appears she took quite the hit from the studio lamp. Kelly tries to convince Ron that her injuries are only temporary. But Ron doesn't buy it. She asks him if the contract could be postponed, but Ron tells her that isn't possible. He tries to cheer her up by offering her a desk job when she starts feeling a bit better. After the phone conversation she looks around her apartment and has a meltdown after reading another get well card. She tears up a bouquet of flowers and throws it away. But then she looks at one of the flowers and begins to study it. As she holds it she drains something from the flower. Still unaware that she has healed her wound she removes one of her bandages and notices her wound is gone. Kelly sees a new opportunity presenting itself and isn't freaked out, but smiles...

"Women are God's cure to stress."