"Samgar" is a fan-created word coined to describe the relationship between the two characters Samuel Sullivan and Edgar.

Edgar, having returned from his mission to retrieve the compass, tells Samuel about meeting Peter. He then asks Samuel who'll be replacing Arnold, to which Samuel responds that "family" cannot be replaced.

Fourteen years ago, Samuel catches Edgar stealing a crystal ball from the fortune teller. He scolds Edgar, who calls the fortune teller a hag. At this, Samuel slaps him, asking him what Joseph would think if he heard Edgar.

Edgar and Samuel, along with the other carnies, have breakfast together. Edgar listens as Samuel gives his speech.

Samuel asks Edgar to deliver some tickets to Captain Lubbock and his family. They discuss Sylar's arrival, and Edgar is not happy about it.

That night, after Sylar's baptism, Edgar watches angrily as Sylar flirts with Lydia. Samuel tells Edgar to stop pouting and that Sylar will be of use to them soon.

After Hiro and Lydia return from the past, witnessing Joseph's death, Lydia immediately tells Edgar of the turth. Minutes later Samuel, whilst serving dessert says that they've all worked to bring their shared destiny together. He tells them they should be particularly thankful because the future is there, and it will be greater than Joseph can imagine. However, he can't say anything further while there's a traitor in their midst. He tells the carnival members that the person who killed his brother is sitting at the table.

Edgar speakes out, saying that it was Samuel but he denies it and insists it was Edgar. As the pair argue Samuel raises rocks and Edgar reaches for his knives, just as Hiro intervenes and stops time. Edgar thanks him but Hiro stops him from killing the frozen Samuel, persuading him to escape, Edgar agrees and the pair agree to stop Samuel together. As time resumes Samuel mutters that Edgar was a traitor.

Samuel asks Eli to take over from the recently departed Edgar to be his right-hand man. 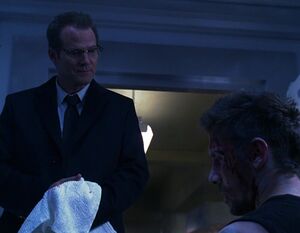 Edgar is interrogated by Noah.

Noah interrogates Edgar, beating him and asking what Samuel wants with Claire and where he is. When Edgar can't answer, Noah takes one of his kukri knives and admires it. Edgar admits that it's the knife that he used to cut Noah. Before Noah can start cutting, Lauren interrupts and calls him outside. She tells him that his actions look like revenge and that torture won't work, warning him that his crude tactics aren't getting him anywhere. She suggests that he start talking to Edgar and get his story. Noah realizes that Edgar doesn't have a compass and there is a reason for this.

Noah pulls up a chair and offers Edgar a cup of tea. Noah asks what Edgar wants and the speedster admits that he was exiled after he learned that Samuel killed Joseph. Samuel turned the carnival members against Edgar, forcing him to leave. Edgar says that Samuel ordered him to kill Danko and cut open Noah, but Noah doesn't believe that he's a killer. Edgar admits that he hoped to take Noah back to win a place in the carnival again, in order to protect his friends from Samuel's plans.

Lauren brings Edgar up to Noah's apartment and he provides a layout of the carnival. Now they have to find it, but Noah refuses to involve Claire by using her compass. Edgar explains that he can get in with Lydia's help. They'll isolate Samuel in a backstage area and take him captive. However, when they can't assure Edgar that they can keep the others from getting harmed, either during their raid or afterward, he has second thoughts. He produces a hidden lock pick and secretly frees himself. He grabs the carnival layout and speeds away before they can stop him.