"Clach" is a fan-created word coined to describe the relationship between the two characters Claire Bennet and Zach.

As seen in Genesis, Claire hadn't talked to Zach since the 6th grade. Claire will be turning 16 by the end of 2006 and Zach is at least 16 since he did drive Claire to meet her bio-mother in Kermit, TX (Distractions). Both appear to be juniors at Union Wells High School in Odessa, TX. 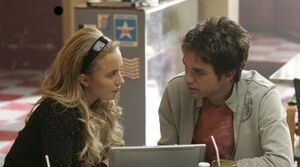 Claire and Zach at a diner. (The Fix)

Clach fans could see the chemistry between both Zach and Claire from the very beginning, starting in Genesis when they were walking down the dirt road. Zach mentions he "nearly fudged himself" after witnessing Claire's recorded plummet off of a 70-80 foot construction bridge when she just got up and just "put herself back together again".

Zach and Claire's relationship best fits the drama archetype "opposites attract". Claire is the popular cheerleader who desperately wants to fit in with her classmates at school at a time of many uncertainties, a theme that resonates with many younger viewers. Zach is an independent thinker who is not afraid to go outside of popular teen opinion: slightly scruffy, hangs with the comic book reading "freaks", not that athletic yet computer savvy. There are many many instances of a suspected relationship forming between both Zach and Claire during Season One. 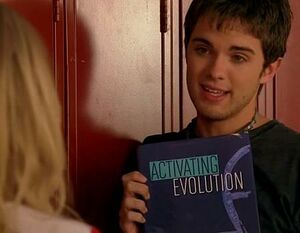 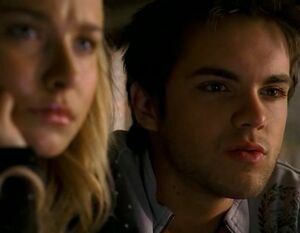 Claire and Zach look over an article online. (The Fix)

"I'm finally realizing who my friends really are. And that maybe being different isn't the end of the world. That's just who I am."

"Exactly, you gotta embrace your inner freak. Because the only thing that you'll regret is denying who you really are."