Chiro is a fan-created term describing the relationship between Charlie Andrews and Hiro Nakamura.

Continuing their journey to meet Peter Petrelli in New York City, Ando and Hiro stop for breakfast at the Burnt Toast Diner in Midland, TX. They meet a waitress, Charlie, who speaks excellent Japanese considering she's learned it from a phrase book and in only a week.

Hiro is immediately charmed by Charlie and spends a great deal of time with her, coaching her on her Japanese. She confesses that for the last few months, she's been able to remember and fully understand everything she reads, which is how she picked up Japanese so quickly and how she can speak better than would be expected from a phrase book. Hiro tells her he also has a "skill", but when she presses him about it, he tells her it's to teach anyone Japanese.

While Hiro is in the bathroom, Charlie's body is discovered with her head sliced open. Sheriff Davidson questions Hiro and Ando and tells them to stick around so he can get a statement from them. Hiro feels that he should have done something to stop Charlie's murder. Ando tries to persuade him that it's too risky to attempt to go back in time to save her, and that they should just continue their mission, but Hiro disappears into the past anyway.

Hiro's friend Ando Masahashi and Peter Petrelli anticipate his return to help save the cheerleader, but he never appears. Peter decides to go without Hiro while Ando patiently waits in the Burnt Toast Diner. He notices that Charlie's birthday picture has Hiro in it. Wondering when the picture was taken, he asks the manager about his friends identity. Manager says the picture is about six months old from Charlie's Birthday, and that it is in fact, Hiro. She says Charlie and he were friends up until a couple of weeks ago. Hiro appears briefly near the end of the episode at the pictured birthday party in the Burnt Toast Diner. He is excited to see Charlie but soon remembers what needs to be done - to somehow save Charlie from losing her top.

Hiro arrives at the Burnt Toast Diner six months in the past, though he thinks it's only one day prior. After telling Charlie that he is there to save her life, she invites him to her birthday celebration. Hiro tries in vain to explain to Charlie that he teleported from the future and tells her not to go to work tomorrow. He realizes that he teleported back too far, and is afraid to teleport again for fear of missing his mark. Hiro calls his work looking for Ando, but instead is answered by the oblivious Hiro native to that time.

Hiro tells Charlie that she has a special power, despite Charlie's doubts. Hiro attempts to prove his power to Charlie: in no time, he gives her a bouquet of flowers, completes her order, and finally tells her that tomorrow "the swallow will slay the dragon." The next day, Hiro shows Charlie a Japanese newspaper proclaiming that the baseball team, the Swallows, slew the Dragons. He suddenly transforms the room to be filled with folded paper cranes, a Japanese tradition that earns one wish. Hiro then offers Charlie a plane ticket to Japan along with him. The two grow closer, and eventually attempt to kiss. Suddenly, Hiro is teleported back to the present on a rooftop in Tokyo; he is unable to teleport back. He physically travels back to Texas to meet up with Ando where he realizes he wasn't able to save Charlie. Despondently, he proclaims that he can't change the past

Hiro angrily tells Ando that Charlie was special to him.

Hiro travels back to the date of Charlie's death, intending to save her from the hands of Sylar. He stops time just before Sylar slices Charlie's head, and later makes a deal with Sylar so that Charlie's aneurysm can be cured. However, when the two of them leave for their "happy ever after", Samuel shows up, having used Arnold to have Charlie trapped in time. Samuel says that in order to save Charlie, Hiro must do whatever Samuel tells him to.

Hiro reprimands Samuel, and orders Charlie back. Samuel gives Hiro the task of finding an old film instead.

Hiro discusses his predicament with Lydia, who finds that Hiro wants Charlie back badly. When Samuel does not hold up his end of the deal, Hiro confronts him angrily.

Hiro tells Ando he is doing much better and says that it's time to get their simple, happy lives back, even if they have to fight for them. A nurse comes in and says that a woman in Room 1106 gave him a note. He reads it and it says, "It is really you? Come find me." Inside of it is an origami crane. Hiro and Ando go to Room 1106, and Hiro insists that Charlie is the only one who could have left him the note. He enters the room and finds an elderly woman. She addresses him as Hiro, and Hiro realizes that it's his Charlie, but many decades older. Charlie explains that Arnold was waiting for her outside of the Burnt Toast Diner, and took her through time to Milwaukee on January 26, 1944. She got a job in a munitions factory and lived the next 65 years. Hiro apologizes, explaining that Samuel sent her through time because Hiro loved her. Charlie tells Hiro that she would have waited for him, but she was middle-aged by the time he was born. She's happy that she got to see him before she died. The brain aneurysm never troubled her, but everything else is about to give out. Hiro says that he can fix everything, and Ando takes his friend aside. Hiro says he'll go back to 1944 and save Charlie, and Ando asks who he's doing it for: Charlie, or himself. Hiro insists he's doing it for Charlie, and Ando walks out of the room. 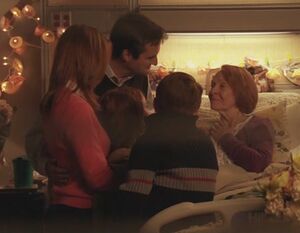 Hiro explains his plan to Charlie. She says that it sounds nice, but she's already had a wonderful life. Charlie's granddaughter Sally comes in and Charlie introduces her to Hiro. Charlie sends her to bring her mother and father, and then explains she married a wonderful man and has had four children and seven grandchildren. She doesn't want to cause all of that to go away. Ando tells Hiro that Noah needs them now. Hiro looks in at Charlie as her family gathers around her, and realizes that he has saved her and his hero's journey is at an end. Ando tells him that Samuel is in Central Park, and destiny calls. Hiro bows to Charlie and blows her a kiss, touches Ando, and teleports away.

"You make me happy too."

"Well, it's more than that. I don't let people get very close. There's a blood clot in my brain ... inches away from an aneurysm. I'm dying."

"Oh, you did. You did. Before you got here, I'd decided to give up. But you have made me feel more alive, and more full of joy than I could have ever imagined. Hiro. I love you."