From Heroes Wiki
< User:Punxas
Jump to navigation Jump to search

Antipathic mimicry is the ability to duplicate the powers of other evolved humans within proximity and reproduce them at will when thinking about the original source of the power.

Punxas is the only known character to have this ability. 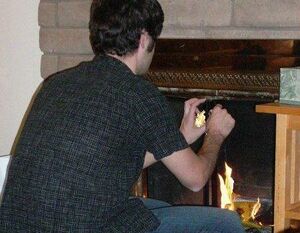 Michael, or Punxas, possessed an empathic ability that allowed him to duplicate or "absorb" the powers of other evolved humans near him. Due to the Antipathic nature of his abilities, he only absorbs abilities of evolved humans that he experiences great antipathy for.

While antipathy may be induced by previous experience, it sometimes exists without a rational cause-and-effect explanation being present to the individuals involved.

The exact range at which mimicry occurs is not known, as is in Punxas' case alongside his aptitude to use the ability.

At first, Punxas was only able to mimic enhanced mathematics from one of his most hated teachers at his school. While 'letting his anger keep him warm,' Michael was able to learn mathematical material at an accelerated rate, and retain the information verbatim. Being his first mimicry ability, enhanced mathematics is his power with the most experience, which allows him to mimic it at will.

Punxas later was able to mimic two separate abilities at the same time. The first time, the abilities were recalled in a moment of extreme disharmony, and Punxas was able to escape danger. Later, he has mysteriously been able to reproduce both powers separately at will. Punxas has fine-tuned his pyrokinesis to the point of lighting cigarettes and small fires. He has mastered enhanced strength from Knox but has not mastered the fear-detection aspect from the original owner.

After meeting Matt Parkman and Daphne and being utterly disgusted by the motivation behind their romance, Punxas has been able to mimic both telepathy and super speed. Being a runner at heart, Punxas quickly mastered super speed. Inversely, his oblivious nature has made telepathy difficult to use, and can only mimic it in times of extreme disharmony or agitation. Ironically, with the bit of the skill he did gain from Matt Parkman, Punxas has also managed to 'tap into' the precognitive plane of consciousness on two occasions.

Finally, Punxas went on a hero's quest after experiencing a higher state of consciousness that involved Hiro Nakamura. Afterwards, he met the real Hiro, and was completely affronted by what the time-traveler had become. Shortly thereafter, Punxas was able to teleport across the nation, but not back again. Punxas has only stopped time time once, for a brief period of time. He has not been able to time-travel at all.

"God! I hate Knox so much! When are they finally going to kill him off. I sure hope they don't bring him back from the future or anything... otherwise, I'm going to really hate on him more."