This article archives the history of Daniel Linderman during Season Three.

For more about Daniel Linderman, see the main article.

After Nathan Petrelli suffers an assassination attempt by Future Peter, he wakes up in a hospital to find Linderman standing before him. Nathan supposes it must have been Linderman who had healed him. He quotes Shakespeare and tells Nathan that the both of them are meant for great things.

Nathan is still in his hospital room. Tracy Strauss, a political advisor who looks exactly like Niki Sanders, speaks with him, offering him a job as a Senator for the state of New York. Nathan is confused, instantly recognizing the woman as Niki. Tracy denies any ties to her, claiming that she isn't Niki "in the slightest". Tracy leaves her card and cell number, and leaves the room. Linderman enters right as she leaves, causing Nathan to think that Linderman put Niki up to this. Linderman assures Nathan that Tracy was not Niki, but that it was fate that a woman so familiar-looking would offer Nathan "the chance of a lifetime". He urges Nathan to accept the offer, saying it's God's plan, and Nathan kicks him out of the room.

Later, Linderman plays chess with Nathan in his hospital room. Nathan tells Linderman that he won't let him manipulate him this time, Nathan's in control, and Linderman agrees. A nurse enters, telling Nathan to get some rest. He tells her he's in the middle of a game, and she asks if he's playing against himself, unable to see Linderman. Linderman informs Nathan that nobody can see him, except Nathan.

Nathan, now a Senator, is in his new office with Linderman. John Wellner, a staffer under Nathan, asks what type of desk he would like, since Tracy isn't answering her phone to make the decision for him. Linderman suggests one type of desk, but Nathan purposely chooses the type Wellner suggests instead. As Wellner leaves, Nathan confronts Linderman, not trusting him and finding it unusual that only he can see him. Linderman claims that Nathan's recovery and ability to fly are the work of angels, and claims that he only wants to help Nathan to eventually become president. He asks Nathan to trust him, saying that this is the path to salvation. Nathan remarks that it's not his own path, if Linderman's leading the way.

Later on, once Nathan has his new desk installed, Tracy meets with Nathan, giving him her resignation letter. She says sadly that after learning who she is, she knew what she had to do. After she leaves, Linderman tells Nathan that his path is to save Tracy, who is about to attempt suicide.

After saving Tracy's life, Nathan begins to wonder how Linderman knew she was about to kill herself. Linderman continues to insist that he is helping Nathan follow God's plan. Nathan laments that he has a dead mobster instead of Moses's burning bush.

Linderman hires Daphne Millbrook, a woman with super speed, to recruit people such as Knox, Adam Monroe, even Hiro Nakamura and Matt Parkman, to their cause. Daphne notes how strange it is that she can never sneak up on Linderman, when her speed usually allows her to sneak up on anyone. She tries hitting him, but her hand goes right through him.

It is later revealed that Linderman's return is due to Maury Parkman, who has been using his ability to create illusions of the mobster and further Arthur Petrelli's plans.

Hiro Nakamura has a vision of the past, 18 months ago. In this vision, Arthur Petrelli throws a party for his family. Nathan Petrelli approaches Linderman, warning him that he will be arrested for all he's done. Linderman talks with Arthur alone, asking what to do, and reminding Arthur that Nathan will find evidence against them both if he digs too deep. Arthur calmly responds that he'll talk to Nathan, and if that doesn't work, he'll kill him.

Later, Nathan and Heidi are hit by a black SUV, paralyzing Heidi. Arthur had ordered Linderman to have this done. Arthur tells Linderman that Nathan survived the crash, and Linderman shows guilt and concern for paralyzing Heidi. He notes that another attempt on Nathan's life may seem suspicious. Angela overhears them talking, and she is furious at Arthur for wanting to kill their son.

After Arthur uses his telepathy to brainwash Angela into believing that Arthur's plans to kill Nathan was necessary, Linderman speaks with her privately, claiming he feels remorse for allowing Arthur to manipulate her so. He heals Angela's mind, freeing her from Arthur's control. 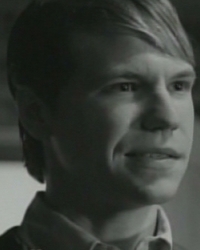 In 1961, Linderman was sent to Coyote Sands, an internment camp meant to hold people with abilities for Chandra Suresh to study. Linderman was often seen with his friends Charles Deveaux and Bobby Bishop. The three of them greet Angela Shaw and her sister Alice Shaw in their cabin shortly after the girls arrive at Coyote Sands. Charles introduces him as the one with the funny accent.

Later, the three of them are outside Angela's cabin as she tells her sister about her nightmares. When Angela steps out for air, Charles confronts her about their powers, but Angela doesn't believe them. Linderman then steps in and asks Angela about her scar. Angela watches as Linderman heals the scar. Charles compares the camps to the holocaust and convinces her to escape with them. As Angela heads back to her sister, she warns them about trusting Dr. Suresh.

They escape the camps and head to Coyote Sands Café. Angela tries to call the police, but they do not believe her. When she tries lecturing the others of the severity of this situation, Linderman calmly replies he's "enjoying the moment". Charles dances with Angela, prompting the chef to tell them that interracial dating isn't allowed. Charles reveals his ability and makes the diner pretend nothing happened. As they're heading out, the radio reports a severe storm and Angela urges them to get back to Alice immediately.

After observing the aftermath of the massacre at Coyote Sands, the trio and Angela are back at the cafe. Linderman is disturbed, but calm. Angela reveals she's had a dream where they form a company and hide the truth about their abilities, in order to prevent this from happening again. She tells them they do what they need to, even kill, and that it's a necessary evil.