From Heroes Wiki
< The Haitian
Jump to navigation Jump to search

This article archives the history of The Haitian during Season One.

For more about The Haitian, see the main article.

Officer Matt Parkman is reading people's thoughts at a bar in Los Angeles when he spots a mysterious man whose thoughts he cannot read. As Matt stands up, he collapses to the floor. 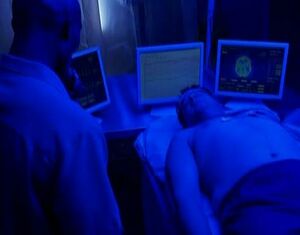 The Haitian examines Matt in the company's medical facility.

An abducted Matt wakes up in an unknown location to find Mr. Bennet and the man standing over him. The man appears to be able to keep Matt out of Mr. Bennet's thoughts, but with only partial success. Mr. Bennet tells the man to "go deep and clean him out." Later, the man again accompanies Mr. Bennet as he abducts Nathan Petrelli.

Matt wakes up on his couch last remembering being at the bar and assuming that he just had too much to drink—evidently the work of the man's powers. In Las Vegas, the man and Mr. Bennet attempt to kidnap Nathan, but he flies away. Later, the man accompanies Mr. Bennet home to Odessa, TX where he erases a hospital-bound Brody Mitchum's memory.

Ted tells Matt about his abduction by the Haitian from a Kansas hotel.

At the top of the hill, Eden is leaning against a tree, waiting for Sylar. Upon seeing her he pauses momentarily before raising his hand. Using her power of suggestion, Eden tells Sylar that he doesn't want to hurt her and that they need to talk. She tells him to tell her all about himself, but first he needs to sleep. The Haitian surprises Sylar and covers his eyes. Sylar quickly falls to the ground

The Haitian stops Eden's powers after she abuses them on Officer Parkman. He then assists Mr. Bennet with controlling Eden's behavior. 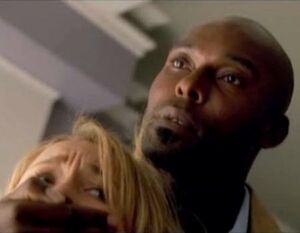 At Primatech Paper Co., while Eden and Mr. Bennet argue about Sylar, Eden makes a comment suggesting that the Haitian cannot speak.

The Haitian enters Claire's room and places his hand over her mouth. He finally speaks, telling her that he works for her father, who sent him here to make her forget what she knows. He admits to erasing the memories of Lyle Bennet and Zach, even to the point of erasing Zach's memory of his friendship with Claire, and to erasing Sandra Bennet's memories many times. He tells her that her father will be home soon, expecting Claire to not remember anything, but that it's important that she does remember. He asks her if she can keep a secret.

In Sylar's cell, the Haitian assists Mr. Bennet in apprehending Sylar, who has attacked Eden. The Haitian then accompanies Mr. Bennet to Eden's father's home where Mr. Bennet orders the Haitian to erase all of the derelict father's memories, but instructs him to "leave the guilt".

At the abandoned refinery, Claire talks to the Haitian and asks whether she's safe or if she still needs saving. He tells her she's safe for now. Claire tells him that she wants to talk to Peter Petrelli, but he tells her that she's not supposed to remember Peter, that he's being watched, and that if she tries to contact him, her father will find out. Claire complains that everything in her life has been a lie, and he confirms her suspicion that Hank and Lisa work for her father. She tells him the only person she could trust was Zach, but that he took Zach from her. She begs him to restore Zach's memories, but he tells her his "gift" doesn't work that way. She says she doesn’t consider her power a gift, but he says that their powers come from God and should be respected accordingly.

After hanging wind chimes outside her window to let him know she needs to see him, Claire Bennet meets the Haitian at the abandoned refinery and, complaining that her entire life is a lie, asks about her birth parents. The Haitian tells her he knows nothing about her real father, but that Mr. Bennet told him her real mother died in a fire fourteen years ago.

The Haitian and Mr. Bennet come rampaging into the Bennets' home, just in time to stop Sylar from killing Sandra Bennet. Mr. Bennet tells the Haitian to get Sylar — and kill him. Unsuccessful, the Haitian returns to erase Sandra's memory.

At the Bennets' home, the Haitian and Mr. Bennet shoot Sylar.

The Haitian and Mr. Bennet travel to New York City and meet with Isaac Mendez in his apartment. There they learn that Peter Petrelli has encountered Claude Rains. With the help of Isaac's paintings, they find Petrelli and Rains on the rooftop of the Deveaux Building. After using heat detecting goggles to bypass their invisibility, Bennet and the Haitian fire tasers at each of them. While Bennet successfully hits Rains, the taser that the Haitian fires is stopped by Petrelli (using space-time manipulation and telekinesis). Petrelli then takes Rains and flies away. The Haitian and Bennet then end their pursuit after Bennet receives an urgent call from Claire. They then return to Odessa. 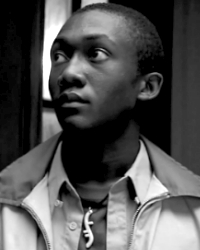 The Haitian is called upon for the first time to erase the memories of Sandra Bennet.

Fourteen years ago, Mr. Bennet meets the Haitian for the first time when the Haitian erases Sandra Bennet's memories of finding incriminating evidence about Mr. Bennet's secret life. The Haitian is sent by Thompson so that they will not need to kill Sandra to contain the company secret.

In the present, Mr. Bennet discovers that the Haitian can talk and that he has been helping Claire. The Haitian leads Claire, Sandra, and Lyle to safety from the Bennets' home and away from Ted Sprague who was holding them hostage. Mr. Bennet reports the Haitian to Thompson for protecting Claire, and pretends that he never knew of Claire's ability. Bennet is then sent to kill the Haitian, but instead colludes with the Haitian to take Claire to safety, and cover it up by injuring Bennet on the bridge with a gun and "going deep" to clear Bennet's memory of anything that will lead the The Company to Claire.

On Mr. Bennet's orders, the Haitian prepares to take Claire out of the country. En route, he stops to make a phone call, speaking in French. At the airport, Claire steals the Haitian's passport and boarding pass, and an airport security agent stops the Haitian from proceeding. The Haitian goes to Peter Petrelli's apartment in New York City to greet Claire there -- along with Claire's grandmother, Angela Petrelli.

After a stop at an Odessa coffee shop, Mr. Bennet is shot by the Haitian on the bridge. He turns to Claire and tells her they need to go.

As a child, the Haitian feels guilty for being part of the cause of his father's torture by the Tonton Macoutes. When his father decides to make a sacrifice to the Loa, the Haitian is surprised that he has been ordered not to attend the ceremony. Instead, the Haitian and his friends sacrifice a pig to give the Houngan strength. The Haitian clandestinely watches his father use his power, but is discovered when Guillame's power wanes. Guillame beats his son, who prays for death. In the midst of this traumatic experience, the Haitian's power manifests uncontrollably, erasing the memories of his people and reducing them to a zombie-like state. 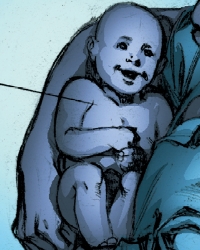 Guillame holds his son as a baby.

The Haitian remembers venturing through a forest with his father, seeking the crossroads for "penance". After they arrive at the crossroads, they pitch camp and his father tells him the story of the serpent and the crane. The Haitian says that that night, he dreamed only of snakes with no teeth and a crane with a broken neck. The next morning, they come to the crossroads and the Haitian sees many skulls and an axe. His father commands him to take the blade and charges at him with the axe, saying that he wants to fly again.

At the crossroads, the Haitian is a victim to his father's power and experiences horrible sensations. He reaches out for his father and his power allows him to become one with his father's mind. Memories of the two of them together flash through their minds and Guillame drops the axe. The Haitian receives his father's necklace just before Guillame jumps off the cliff. The Haitian, now alone, remembers his father's final command--to bury the zombie-like villagers. As the Haitian is about to bury a villager, he meets Thompson for the first time, who offers help, and they walk away.