This article archives the history of Charlie Andrews during Season One.

For more about Charlie Andrews, see the main article. 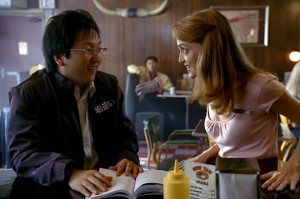 Charlie brings some meals to the table where Sheriff Davidson and Deputy Collins are sitting. Noticing that the Sheriff is having some difficulties with a crossword, Charlie simply gives the answer. Amazed, the officers begin to quiz Charlie on her amazing memory up until the point where Charlie jokes that they should ask if she remembers their credit card numbers. She then goes on to serve Hiro Nakamura and Ando Masahashi and recites a Japanese symbol on Hiro's jacket. When asked if she speaks the language, Charlie tells the men that she started to thumb through a Japanese phrase book last week. She tells them in Japanese that Tokyo is going to be one of her stops on her trip around the world. Ando finds it amazing that she learned all of this in one week and Charlie explains that her brain is able to remember lots and lots, whether she wants to or not. Charlie takes their orders and goes to get their food.

Later, Charlie sits with Hiro, who begins to teach her more Japanese. Charlie repeats a few phrases and is soon able to talk in perfect Japanese. She tells Hiro that she thinks he is sweet and that she likes the way his cheeks wobble when he concentrates. A bell rings and Charlie tells Hiro in Japanese that she will be right back. Later, she once again checks on him before making her way into the back room. While opening a can, Charlie hears noises but is unable to see anyone. Unbeknown-st to her, a murderous individual is hiding behind her. As Charlie opens the can, a slicing sound is heard and blood pours down from Charlie's emotionless face. Charlie then falls to the floor, dead. Hiro becomes determined to save her and tries to teleport back in time a day to warn her of her death and stop her from going to work.

Hiro travels back in time six months ago to April 24th and meets Charlie on her birthday. Charlie serves him and Hiro tries to tell her he is from the future. Charlie is confused and is then called over to take a photo with her birthday cake. Always kind, Charlie invites Hiro to be in the photo with her.

Hiro travels back in time six months ago to April 24th and meets Charlie on her birthday. Charlie serves him and Hiro tries to tell her he is from the future. Charlie is confused and is then called over to take a photo with her birthday cake. Always kind, Charlie invites Hiro to be in the photo with her. Hiro continues to plead with Charlie not to go to work tomorrow but then realizes that it is raining. Charlie comments it has been "April Showers", surprising Hiro, who realizes he has gone back too far. Charlie calms him down by offering him some cake.

Some time later, Hiro gives Charlie a Japanese phrase book as a birthday present. He comments on how she learned Japanese quickly and she responds that "lately [I've] just been able to remember everything". He tries to explain to her that both she and he have powers. She doesn't believe him and dismisses his giving of flowers and serving her order as a magic trick. Hiro ends the conversation by saying "tomorrow the swallow will slay the dragons".

The next day Hiro shows the Japanese newspaper which she reads flawlessly that shows the Tokyo Swallows defeated the Junichi Dragons in baseball yesterday. She still doesn't believe him until he makes one thousand origami cranes appear instantaneously. He shows her two plane tickets to Japan that he has bought for them in order to escape Sylar and she agrees to go on the trip with him.

Some time later Hiro tells Charlie about a 24-hour samurai film festival in Austin and wants to take her to prepare for their trip to Japan. She then reveals to him that she has a blood clot in her brain, she is inches away from a brain aneurysm, and that she is dying. She tells Hiro that he saved her by making her feel alive and filling her life with more joy than she could imagine. She confesses to him, "Ai shiteru," which is Japanese for "I love you." When Hiro goes to kiss her, he disappears, returning back to Japan six months later at Yamagato Industries during calisthenics. 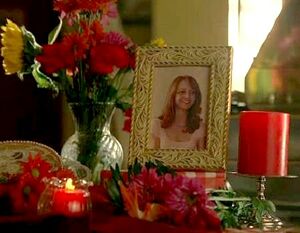 Hiro laments that he could not save Charlie, despite his best efforts. Later, at the Burnt Toast Cafe, Isaac shows Hiro a picture he drew of Charlie and Hiro, sitting and eating together. The sketch, of course, came true.

Nathan and Hiro meet again in Isaac's loft and Nathan notes that Hiro's English is a lot better than the last time they met. Hiro explains that Charlie "teach me many things," including English.

In a flashback, Sylar watches Charlie greet Hiro and Ando at the Burnt Toast Diner. He later uses the power he stole from her.

Charlie appears in Sylar's eyes, after he is stabbed on Kirby Plaza, as one of his victims.

In Claire's fourth MySpace post, "Homecoming", Claire asks if anyone else has heard about the murder that happened at the Burnt Toast Diner. She says that some waitress was murdered with the cops present but the murderer got away.

In Zach’s ninth MySpace post, “Rumors”, Zach posts that his mood is shocked. He claims that rumors must be true that Jackie Wilcox was murdered at the homecoming game. Zach says that people believe it was the same murderer who killed the Burnt Toast waitress the week before.

In Zach’s tenth MySpace post, “Seriously Freaking Out”, Zach says that he is going to go eat at the Burnt Toast Diner and wonders if someone will be there to desecrate the memorial to the waitress that was murdered there. This is in response to him thinking that people are desecrating Jackie's memorial.