This article archives the history of Simone Deveaux during Season One.

For more about Simone Deveaux, see the main article. 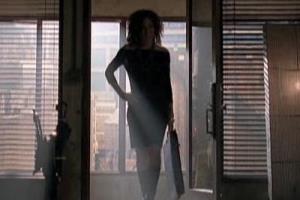 Simone visits her ailing father at his apartment. His hospice nurse, Peter Petrelli, flirts mildly with her, but she tells him she's seeing someone.

Later she visits her boyfriend Isaac Mendez at his studio. She stops him from destroying several of his paintings. He confesses that he's been using heroin again, and that he believes his paintings are coming true. When he says he plans to quit cold turkey, she calls Peter and has him meet her at her father's apartment. Taking some morphine, she tells Peter she needs him to come along because he can give a shot.

They arrive at Isaac's apartment and find he has overdosed. Simone calls 911 and cares for Isaac through the night.

Isaac wakes up the next morning with Simone still caring for him. When he again insists that his paintings are predicting future events, they argue.

Isaac returns to his studio to find Simone gathering his paintings together for a show. She tells him they can use the money to pay for rehab, and that she's thrown his drugs away. He again insists his paintings are predicting the future, and when he gives Simone an ultimatum, she leaves him.

Later, Simone runs into Peter in the lobby of her father's building. He tells her that he's quit his job as a home hospice nurse, and that he's destined to do something bigger. She tells hims she'll miss him and he tells her that everyone bumps into each other in New York sooner or later.

At Nathan Petrelli's campaign event, Simone runs into Peter. Just as they are getting closer, Nathan begins his speech. He tells the audience that his father committed suicide after a battle with depression and claims that Peter's fall was also a depression-related suicide attempt. Peter storms out and Simone follows him.

Simone runs into Peter in the street, and tells him she knows he didn't try to kill himself. They kiss, just as Isaac is looking at a sketch he drew sometime prior of the same scene.

Simone and Peter wake up together in Peter's apartment. When Peter steps outside to talk to Nathan, Simone gets dressed and ready to leave. She tells Peter she's not sure she's ready for another relationship yet.

Peter calls Simone in an attempt to locate the missing painting.

Simone arrives at Peter's apartment and tells him that her father has died. She and Peter go to Isaac's studio but find it empty. She tells Peter that her father woke up just before he died and said he flew over the world with Peter, who told him everything would be okay. She tells Peter she got his messages about the painting and that it's been sold to Mr. Linderman.

Simone is hosting a show of Isaac's paintings at her gallery. Before the show, Simone tells Isaac that he smells terrible and should go freshen up. 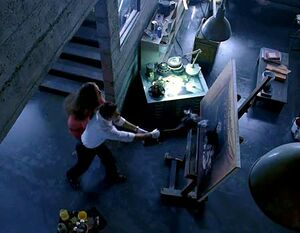 Simone attempts to stop Nathan from destroying the missing painting, but is too late.

Nathan has acquired the missing painting, and he meets Simone at Isaac's studio to view it. Simone tells Nathan that Peter believes Isaac can paint the future, and the painting shows what appears to be Peter, dead, underneath the Homecoming banner at the Union Wells High School. Nathan destroys the painting by splashing it with black paint.

Later, Peter meets Simone at Isaac's apartment. Simone shows Peter the ruined painting, and tells Peter that Nathan did it to protect him so that he wouldn't get himself killed. Peter asks Simone to describe the painting to him. Simone retrieves a digital copy of the original painting from her pocket book and shows it to Peter. She tries to convince him not to go, but Peter tells her he has to. She tells him that Union Wells High School is in Odessa, TX, and that homecoming is that night.

In one of Peter's dreams, Simone appears in a deserted New York City, being held back by Isaac.

Simone visits Peter in his hospital room. Nathan confronts her about showing Peter the missing painting, and asks her to take him to Isaac.

Simone and Nathan arrive at Isaac's apartment. Simone is surprised to see his paintings, which were missing the last time she was there. She tells Nathan that Isaac has been gone for three weeks. Isaac now sober, tells Simone that he's only alive because of her and that he still loves her. Simone is surprised that Hiro is really the character from Isaac's comic book. She tells Hiro that Mr. Linderman is a client of hers, and that he purchases every painting of Isaac's that he can. Rolling up his latest painting, she tells Hiro that she can arrange for him to meet Mr. Linderman.

Simone visits Isaac at his studio to ask if he can use his power to tell her where to find Peter, but Isaac says already been trying without success. She later notices a painting of Isaac and her standing together on the roof of her father's building. She meets Isaac on that rooftop. As Isaac laments the destruction of the city, Simone tells him that he wouldn't have been given his powers if there were nothing he could do. They share a tender moment and depart. 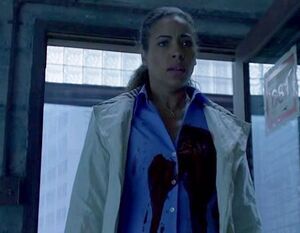 Simone is accidentally shot and killed by Isaac.

Simone visits Isaac at his apartment, asking if he has found Peter. He claims he hasn't, but she can tell he is lying. He confesses that he has painted images in which Peter is invisible, but says he doesn't know where to find him. Simone visits Nathan at his office and suggests that he go public about their powers to help find Peter, but Nathan refuses. Returning to Isaac's apartment, she is accidentally shot and killed by Isaac, who had been trying to shoot down an invisible Peter.

Simone, dead, is placed onto a bed by Peter, while Isaac loses control and begins shooting at Peter, forcing Peter to use his invisibility to escape. Both grieve. Simone's death shakes Peter's ideals, and later causes him to have an emotional breakdown.

Simone's absence, the gun shots, and an anonymous call from Nathan arouse the NYPD's suspicion, causing them to investigate Isaac's apartment. However, Candice Willmer, a Company employee, uses her power to take on the appearance of Simone, to Isaac's shock. Her arrival wards off the police, and she and Mr. Bennet set up the rumor that Simone will be in Europe "indefinitely", leaving Isaac safe. However, Candice takes things one step further by taking on a new appearance: Simone, with blood on her blouse and coat, taunting Isaac to shoot her again. Isaac is left haunted by the image.

Peter has a dream about the first time he met Simone. In that dream, Simone thanks him for taking care of a perfect stranger and she sees Peter as a hero. Peter replies by explaining his thoughts about death and how it can be beautiful. He concludes by saying that he's not the hero, but that Charles is the real hero. After a short pause, Simone shows Peter the apartment.