This article archives the history of Daniel Linderman during Season One.

For more about Daniel Linderman, see the main article.

Niki tells Tina about the thugs, and that Mr. Linderman will track her down regardless of who is responsible for their deaths. She decides to run.

In the Montecito Casino, Linderman's hotel manager, Miss Sakamoto, makes a deal with Niki: in exchange for seducing Nathan Petrelli, Linderman will forgive her debt. Nathan visits Linderman's casino in Las Vegas hoping to obtain money for his campaign. Niki and Nathan meet up and spend some time together, but when Niki tries to back out of the deal, another of Linderman's thugs tries to change her mind.

Miss Sakamoto tells Niki that Mr. Linderman has reviewed the tape of her alter-ego's encounter with Nathan and discharges her debt. She later tells Nathan that the video is a favor he will repay Mr. Linderman for later. However, Nathan senses that this means his election is more important to Linderman than he believed, and leverages more money out of him.

Simone Deveaux tells Peter Petrelli that Mr. Linderman has bought Isaac Mendez's missing painting. Nathan talks with Linderman over the phone to attempt to retrieve the painting for his brother. Linderman sends the painting to Simone's gallery.

At Peter's graduation party, Nathan Petrelli tells his brother that the DA wants him to prosecute Mr. Linderman, which may cause trouble for their father. As Nathan and Heidi Petrelli are driving home, a van rear ends them, causing their car to crash. At the hospital, Nathan tells Peter that it was Mr. Linderman's goons, in response to him thinking about taking the case. Nathan says he will go through with the case if Peter gives a deposition, which he agrees to. The morning of the deposition, Nathan comes to Peter's apartment to tell him the deposition on Mr. Linderman has been canceled after their father died from an apparent heart attack.

Aron Malsky, Linderman's representative, meets with D.L. Hawkins, who turns over the money Jessica had stolen to him. Malsky tells D.L. that he's in Linderman's debt now.

In New York City, Hiro Nakamura discovers that the sword of Takezo Kensei he thought he'd stolen from the Museum of Natural History is only a replica—and that the original is owned by Mr. Linderman. When Simone learns of this, she gives Hiro the dinosaur painting and says she will arrange a meeting with Linderman, explaining that he's a big client of hers who buys every one of Isaac's paintings that he can.

Mr. Linderman sends Aron Malsky to have Niki released from prison. Aron tells Niki that she is being exonerated, as a death row inmate has confessed to all the crimes with which Niki was being charged.

Jessica, on track for her mission to kill Nathan at the request of Mr. Linderman, goes to Las Vegas, where Nathan is going while cooperating with the FBI in order to expose Linderman. However, Linderman is aware of the plan, and sends Jessica to eliminate them.

At the same time, Hiro, having gotten past security with the aid of Nathan, delivers the newest painting of Isaac Mendez to the curator. He also manages to acquire the sword, and even reunites with Ando. Linderman's thugs try to stop them, but Hiro and Ando teleport away, their mission successful.

Niki, managing to take control, warns Nathan of everything at his hotel room. Though Niki tells Nathan to run since his betrayal is now clear, Nathan has a different idea: he will kill Linderman.

Nathan is lead to the kitchen in the lower floors of the hotel, where Linderman is cooking a pot pie. Linderman discusses the concepts of happiness and meaning, stating that one can't have both in life. Nathan, having heard enough of Linderman, draws the gun given to him by Niki. Linderman, however, remains calm, telling Nathan that he knows all about Nathan's ability, along with his brother's and daughter's, and countless others, breaking down a major wall around Nathan. Linderman then guarantees Nathan that he will win the election, and later on get into the White House, by "fluke circumstances". Linderman offers him a life of meaning, and then casually returns to cooking. Nathan still contemplates shooting him, but ultimately doesn't go through with it.

In 1968, "Austin" is on a boat with his war buddies en route to a Vietnamese base. He is a loner who likes to read books. When Loredo snatches his book away, Dallas tries (to no avail) to get Austin to open up. Suddenly, a shoot-out occurs. After the death of all his companions except Dallas, Austin uses his powers to completely heal Dallas's wound.

Dallas commands an uneasy Austin to use his powers to repeatedly heal a tortured soldier. Dallas and Austin finally find the sought-after Skyhawk, but the entire crew is dead. When Austin explains that he can't heal the dead, Dallas calls Austin a freak. Austin recounts his last night at home, when he unsuspectingly healed his mother and subsequently left when his mother and father grew fearful of him.

When Dallas expresses a desire to carry on the mission and kill inhabitants of a peaceful village called Au Co, Austin protests. However, he thinks of the good it might cause, and then decides to join in the destruction.

Austin and Dallas prepare for the invasion of Au Co. When Austin questions attacking civilians, they both witness a girl seemingly raise massive vegetables from the soil. Austin tries to note that she's like him, only to be interrupted by Dallas commenting on how the mission can end the war. After being ordered to get the explosives ready, Austin sets them up to detonate at 15:30. After the explosives detonate, Dallas and Austin proceed to take out targets. After a woman scream "Au Co" towards the girl with a special ability, he tackles Dallas to prevent him from shooting her, both coming to realize the girl is the mission, not the village.

Austin's effort to keep Dallas from shooting Au Co fails, and Dallas restrains Austin until she dies to keep him from healing her. At their base, each receives a medal of valor for his actions on the mission, but Austin refuses to corroborate Dallas's description of how Austin healed his wounds. Later, "Austin" meets with his former unit sergeant, "Dallas", in Central Park. Austin says he finally understands the sacrifices Dallas had to make for the greater good. Saying he believes they can do great things together, he finally introduces himself by his real name: Linderman.

Linderman shows Nathan his art collection. Linderman claims to be a humanitarian who wants to heal the world and demonstrates his intent by healing a dying flower. When Nathan recognizes Hiro in one of the paintings, Linderman says to tell him he wants his sword back. Regarding Isaac's painting of the explosion, Linderman speaks of a time when he and other evolved humans worked together to make the world better until some of them became greedy. He learned that he couldn't heal one person at a time; he had to think big. He claims the explosion will serve as a catalyst for healing the whole world, not just individuals. Nathan says the explosion will destroy half of New York City, but Linderman says that's less than .07% of the world's population--an acceptable loss by anyone's standard. He says Nathan will be able to lead people in the aftermath. Nathan argues that he's losing the election anyway, but Linderman says he hasn't left that to chance and shows a painting of Nathan in the White House. Nathan points out that the explosion is caused by his own brother, but Linderman says that's Peter's part to play.

Linderman summons Jessica to the Corinthian Casino to ask a favor: to borrow Micah's talent. He promises he'll help Micah achieve something monumental, but Jessica refuses. He tells her the request was merely a courtesy, but Jessica tells him he's not taking her son.

At the Sanderses' home, Jessica prepares to take Micah to Linderman, but Linderman meets them at the house and introduces himself. He asks Micah if he'd like to save the world. As Micah rides off in Linderman's limo, Candice drops her Jessica illusion.

After learning of the existence of Ted Sprague, Nathan calls Linderman, telling him that they have a problem concerning the explosion.

Candice Willmer speaks to Mr. Linderman on the phone in a high-rise building where she is watching over Micah. Candice expresses her qualms about "babysitting", but Linderman says something over the line to sway Candice back to the job. 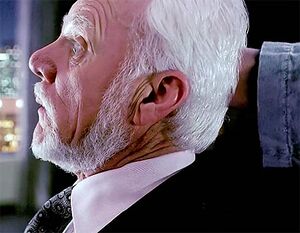 Linderman is killed by phasing in the head.

Heidi Petrelli finds her husband, Nathan, talking with Linderman, and she is uncomfortable at his presence. Before he leaves, he holds her hand and says that he wants to give them both a gift for the occasion. After he leaves, she is able to stand from her wheelchair, her legs having been healed by Linderman's ability.

Linderman convinces a reluctant Micah to do as he's told at the polling place by promising him that afterwards he'll be reunited with his parents, and receive enough money "to live happily ever after." After the election, D.L. and Jessica find Linderman alone in his office and demand to know Micah's whereabouts. After his failed attempt to bribe Jessica to kill D.L., Linderman pulls a gun and fires at Niki, but D.L. jumps in front of her and takes the bullet. When Linderman continues to threaten Niki, D.L. phases his hand into Linderman's head from behind and damages his brain, killing him.

Angela breaks the news to Nathan that Linderman is dead, and also tells him that the plan to let New York explode was not just Linderman's plan.

Later, in Peter's dream, Charles tells Angela that he believes Linderman is erroneously putting his trust in Nathan when he should be betting on Peter.

In Chapter 5, “The Mystery of Kensei”, Daniel Linderman, who is the CEO of Linderman Corporation, found the sword in 1977, which proved Kensei’s existence. Curator Tatsuya Atsumi comments that Linderman owned the largest collection of Kensei artifacts and refused for them to go on tours. This only adds to the mystery because Linderman had been recently killed and the sword went missing shortly before that. Could the killers and everything be connected somehow to Kensei?