This article archives the history of Isaac Mendez during Season One.

For more about Isaac Mendez, see the main article.

For about three weeks, the paintings that Isaac has completed while high have appeared to depict future events.

When he realizes this, he tells Simone, showing her a painting he made weeks prior of a suicide bombing in Israel, and the same image as a photograph in that morning's newspaper. He intends to quit heroin cold turkey, to which Simone objects. Simone returns later to find that he has instead overdosed. She calls in Peter Petrelli, a nurse who is taking care of her father, to help Mendez. Peter sees Isaac's painting of a man who looks strikingly similar to Peter jumping off of a building and seemingly flying, which later sways the nurse to attempt the same thing. Isaac stirs long enough to tell Simone "we have to stop it", indicating a massive painting of an explosion on the floor of his studio.

Isaac wakes up and again insists to Simone that he has been painting the future.

Hiro Nakamura, a time manipulator, discovers a divergent future timeline set a little over five weeks from October 2nd and finds a copy of 9th Wonders!, a comic by Isaac. He goes to Isaac's studio, now filled with paintings of the Symbol, and finds Isaac murdered. The top of his head has been sawed off and his brain is missing—the same modus operandi as the Walker murder of which Sylar is suspected.

Isaac has recovered and has come to cope with the fact that he is "painting the future". Simone, however, does not believe Isaac's assertions about his paintings and is more concerned with Isaac meeting the deadline for his comic book. They argue, and when Isaac gives Simone an ultimatum, she leaves him. Later, Isaac finds a drawing he'd made earlier of a couple kissing which matches the actual event of Peter Petrelli and Simone kissing in the rain. 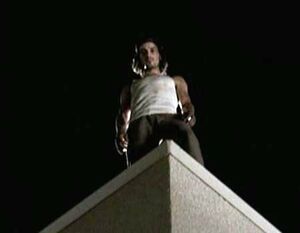 Isaac sees the future before painting it.

When Peter brings Mohinder to Isaac's studio to demonstrate his abilities, Isaac is in a precognitive trance, painting a picture of Claire being menaced by an unseen figure and does not answer the door.

Peter arrives at Isaac's apartment and attempts to persuade him that he believes Isaac really can paint the future. At first, Isaac brushes him off. When Peter finds the unfinished painting and claims he can complete it, Isaac begins to regain his enthusiasm. When the phone rings, Isaac tells Peter to ignore it, but he answers it and tells Hiro he has a message for him.

At Isaac's apartment, Peter tells Hiro, through Ando, about his visit from Future Hiro. He relays the message and tells Hiro to meet him and Isaac in New York so they can locate "the cheerleader". Isaac and Peter then search the paintings for a clue as to the girl's identity. Peter realizes the last batch of paintings fit together like a comic page—but with one panel missing. Isaac tells him that Simone took a piece which was about the right size and shape to sell.

Later on, Eden arrives at Isaac's apartment, claiming to be a fan.

Peter and Simone arrive at Isaac's apartment to tell him about Charles Deveaux's death. However, he is missing and the apartment is completely cleared out.

Isaac and his paintings have been brought to the Primatech Paper Co. where he is recovering from his drug addiction. He has been unable to paint the future without the drugs, but Eden assures him they will help him learn to use his powers without them.

Isaac tells Eden about the first time he painted the future. At a show of his paintings at the Deveaux Gallery, he was confronted by a woman about a painting that shows her getting hit with a bus. She runs out of the gallery, and as Isaac chases her, she gets hit by a bus.

Isaac remains unconscious in Mr. Bennet's custody at Primatech Paper Co. after painting a mysterious picture of an exploding figure. Mr. Bennet, judging the painting useless for purposes of locating Sylar, tries to convince Eden to use her powers to make Isaac take more drugs and paint another painting, but she refuses.

Isaac is sketching in his room in the secret facility within Primatech Paper Co.. Eden comes in and he tells her that while he's still having no luck using his powers without heroin, he's enjoying sketching just to sketch for a change. Eden tells him she's leaving, kisses him, and gives him a cell phone and a security keycard. 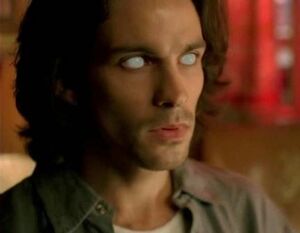 After leaving Primatech, Isaac calls Hiro and Ando and meets them at the bus terminal in Midland, TX. At the Burnt Toast Diner, Isaac examines Issue #14 of 9th Wonders!, the comic Hiro brought back from the future, and is amazed. He tells Hiro he hasn't even sent the issue to the publisher yet. Hiro tells him about the future he saw, including the explosion and finding Isaac dead in his apartment. Isaac tells Hiro and Ando about the painting he made at Primatech of the exploding man. When Isaac learns of Charlie's death, he shows Hiro a sketch he made while clean at Primatech of Hiro and Charlie together at the diner.

Later, in a motel room in Midland, Isaac, encouraged by the prophetic nature of his sketches, tries once again to paint the future without heroin. After some encouragement from Hiro, he manages to slip into a precognitive trance, and paints a picture of Hiro wielding a sword and facing a seemingly living dinosaur.

Simone and Nathan go to Isaac's apartment. Isaac appears out of the back and tells her that he was in a clinic, that he's clean now, and he no longer needs heroin in order to paint. Isaac tells Simone that she is the only reason he is alive. He still loves Simone. Nathan asks Isaac about the painting of a man of fire and remarks that it resembles a man exploding. He asks Isaac how he knows about this, and Isaac tells him that he just paints what he sees.

Simone visits Isaac at his studio to ask if he can use his power to tell her where to find Peter, but Isaac has already been trying without success; none of his recent paintings show Peter. He has, however, painted a view from the roof Charles Deveaux's apartment building showing a destroyed cityscape, and another of himself and Simone standing together there.

He meets Simone on that rooftop later, where he laments that the city he has grown to love is going to be destroyed, and there's nothing he can do to stop it. Simone tells him that he wouldn't have been given the power if there were nothing he could do. Back at his studio, Isaac paints yet another picture, but this one shows Peter half-invisible. Isaac realizes that Peter has been in all of the paintings he made during his search, and calls Mr. Bennet to report his findings.

In his apartment, Isaac tells Mr. Bennet that he called him because he didn't know whom to trust. After explaining to Mr. Bennet that Peter will be the cause of the explosion, he shows some paintings, to signify that Peter is indeed invisible. Mr. Bennet gives Isaac a gun. "What do you expect me to do with this?" he asks. Mr. Bennet replies, "Save the world." Later, Simone visits Isaac in his apartment. He explains that he believes Peter has left New York. She tries to return his key, but he convinces her to keep it, and tells her he believes Peter is dangerous.

Isaac finishes another painting, this time of Peter standing in his apartment. He turns around to find Peter standing there. Isaac explains he was trying to stop Peter, since he was dangerous. Peter exposes the Mark on Isaac's neck, and Isaac says that it means nothing. Peter throws Isaac into a painting. Isaac claims he revealed Peter's location to save the city, not out of jealousy. Isaac grabs the gun and attempts to shoot Peter, who turns invisible. Firing shots blindly at his invisible target, he accidentally shoots Simone, who is just arriving to the apartment.

Isaac and Peter lie on the floor of Isaac's apartment, over Simone's body, and Isaac tells Peter he meant to shoot him. Later, a detective comes in and tells Isaac that neighbors heard screaming and a gunshot. Candice comes in, disguised as Simone, and the detective leaves. Mr. Bennet then comes in, and Candice drops her illusion. Mr. Bennet tells Isaac that as far as anyone knows, Simone is vacationing in Europe indefinitely and a crew will be coming to clean up. Isaac asks what he should do and Mr. Bennet says, "Keep painting". Isaac takes out heroin from a drawer and paints himself dead. 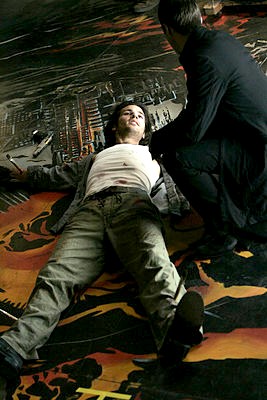 Isaac gives a courier the last art for 9th Wonders! to deliver to his publisher. He also gives the courier his sketchbook.

Later, he comes out of a precognitive trance in front of a painting of Sylar. From across the room, Sylar marvels at Isaac's ability. Unsurprised, Isaac tells Sylar that he is late. He explains that he tried fighting the future, but that he's seen that Sylar will be defeated. Sylar tortures Isaac, demanding to see depiction of his defeat, but Isaac says it's gone. Isaac says he now knows his part: to die here, but not before he shows the others how to kill Sylar and stop the bomb.

Later, Sylar is in a precognitive trance, painting a gruesome interpretation of Isaac's painting of ‎Nathan in office. Isaac lies dead nearby, next to his gun, just as his paintings depicted.