This article archives the history of Maya Herrera during Season Three.

For more about Maya Herrera, see the main article. 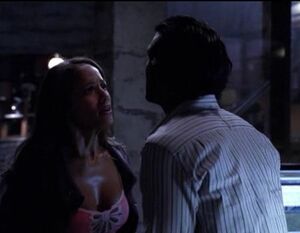 Maya tries to convince Mohinder to destroy the formula.

As Mohinder opens the door to his apartment, Maya attacks him in fear he is Sylar. Realizing it's Mohinder, Maya begins to question if he will ever find a cure to rid her of her ability. He claims that there is no way to rid Maya of it, enraging her. Her power activates, starting to kill Mohinder, but she realizes what is happening and suppresses it. Questioning her about what happened, Mohinder realizes that powers are activated by adrenaline. He extracts some from her for examination. Later, after running some tests, he creates a serum that he believes will give abilities to non-powered humans. Frustrated with the results that opposed her wishes, Maya storms off, saying the serum should be destroyed.

Entering Mohinder's lab the next day to apologize, Maya finds a changed Mohinder, who is diplaying a new attitude along with superhuman abilities. Mohinder guarantees that he is okay and that -- having found a way to grant abilities to the non-powered -- he will certainly be able to find a way to take powers away. The changed Mohinder then passionately kisses Maya and they sleep together.

Maya gets more and more concerned about Mohinder's refusal to leave his lab. She is currently unaware that the serum has negative side effects.

Maya comes back to Mohinder's lab and shows him a missing poster of his neighbor. When she notices a trail of blood in the lab, she quickly leaves. Later, Maya returns while Mohinder is out, and she finds his neighbor cocooned to the wall, as she is trying to free him, Mohinder returns and she hides underneath a gurney. When Mohinder realizes she is there, she activates her ability. She stops before killing him and he attacks her, and then cocoons her to the wall.

Maya finally has her ability taken from her.

Maya is taken to Pinehearst by Mohinder. After Arthur takes her ability, she tells Mohinder to leave her alone. Later, she talks to Mohinder, stating that she wants to start over and make amends with her previous life.

Mohinder looks up Maya's information on a Pinehearst computer. He finds her address and phone number in Montville, New Jersey.

Maya is in her apartment in New Jersey when she hears Mohinder knock on her door. She goes to answer it but no one is there. She sees a piece of paper with her address laying on the floor, in Mohinder's handwriting. She is unaware that Mohinder, his mutation returning after the end of the eclipse, is hiding around the corner. She goes back inside and he leaves.

Maya goes to the Angry Skunk Bar, in hopes of receiving a new identity, but she argues over the price of the service with Misha and the other trafficker. She says she no longer does any tricks. Later, she reveals that Rebel told her to come to this place. She plans to meet with the two traffickers, along with Angie and Harmon, that night. But, the plan is ruined when armed men are at the rendezvous point. Maya tells Angie and Harmon to get away from there and to lay low. The three go their separate ways.

Mohinder remembers Maya as a victim of his horrible actions under the influence of his mutated ability.

In chapter 1 of Operation Bad Blood and Operation Splinter in the iStory, Primatech and Pinehearst both learn that Maya Herrera is the Kill Squad's next target.

In chapter 3 of Operation Bad Blood and Operation Splinter in the iStory, Primatech and the Kill Squad both learn that Maya has an apartment in New York City and pay her apartment building a visit.