This article archives the history of Hiro Nakamura during Season Reborn.

For more about Hiro Nakamura, see the main article.

Tommy owns a copy of 9th Wonders!, Issue #31, the cover of which features Ando and Hiro at Sam's Comics.

In the lobby of Yamagato Tower, Harris disarms Miko, and recognizes that her sword belongs to Hiro Nakamura.

When Noah forces Norris to show him security footage of himself at the hospital on June 13th, he sees that time keeps skipping back and forth in one room he was in. He assumes that the temporal anomaly was caused by Hiro. When Noah tells Quentin what he saw in the footage, Quentin comes to the same conclusion.

Noah Bennet asks Erica Kravid about the true status of Hiro Nakamura. Erica claims that he died at the Odessa Peace Summit on June 13, 2014. Noah, however, does not believe her. 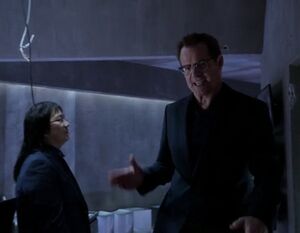 Noah eventually gets Harris to lead him to the facility where Hiro is trapped in the video game Evernow. Noah and Ren learn that Miko Otomo can only release Hiro by sacrificing herself. Hiro is eventually rescued by Miko using the Kensei sword as a key. Hiro emerges from Evernow in time to freeze time around Noah and save his life as he's about to be shot. Hiro greets Noah, who asks Hiro to take him back to June 13th, 2014 to change history. Hiro is reluctant, but decides that Erica Kravid used him to bend time to her own purposes when she imprisoned him, so he agrees. Hiro teleports away with Noah, asking him not to step on any butterflies.

At the Odessa Summit, Hiro and Noah appear and walk towards the building. 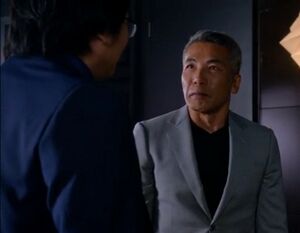 Hiro's back hair is short when he greets Hachiro Otomo.

At the Odessa Unity Summit on June 13th, 2014, Noah tells Hiro what is about to happen, including the bombing of the summit and the death of Claire. Hiro insists that they must find the smallest thread to pull that will result in a more positive outcome without changing too much of established history. Meanwhile in Tokyo, the 2014 version of Hiro is visited in his office at Yamagato Tower by Hachiro Otomo. Hachiro asks Hiro to use his ability to help Renautas with their plans to send things to the future, but when Hiro refuses, Hachiro traps him in Evernow and leaves.

Hiro appears in new attire, and his hair long and in a ponytail when he fights Harris clones.

Back at the summit, 2015 Hiro and Noah hide behind a bookcase and hear Erica order Noah's past self locked away. When they leave, Hiro and Noah are approached by Angela Petrelli, who tells them that Claire has been admitted to St. Jude's Hospital. Hiro tells Noah that they should split up; Noah should go to find Claire while he stays behind and stop the bombs. Noah agrees, and Hiro teleports to the summit's underground car park in search of the bombs. There he finds a Harris clone taunting the restrained Mohinder. Hiro kills the clone and frees Mohinder, but they soon discover that there are many more. Hiro briefly fights two of the other clones, but decides to teleport to several alternate futures mid-battle to see what the various outcomes of the battle would be. Hiro discovers that if he stops the bombing, something worse would always happen in the future as a result. He teleports to St. Jude's Hospital to tell Noah what he has learned. Noah agrees to be taken back to the present, but Hiro finds that his power is being disrupted and that they cannot leave. Moments later, the bombs are detonated and the summit is destroyed.

Hiro and Noah return to Angela, and Noah tries to persuade Hiro to go back in time and try again. Hiro refuses, saying that "fate is fate". Instead, Noah and Angela come up with a plan to hide Claire's newborn children Nathan and Malina fifteen years in the past, so that they will have time to grow and develop their abilities to prevent the coming H.E.L.E. event. Hiro is initially unsure, but Angela persuades him by telling him that her prophetic dreams are fate. Hiro gives in and takes Nathan, Malina, and Angela to 1999, but not before telling Noah that he will be back.

Meanwhile, Hachiro Otomo watches a news report that states that Hiro Nakamura is dead. Hachiro is confused, since he was sure that he trapped Hiro in the Eternal Fortress.

Hiro arrives in 1999 with Angela, Nathan and Malina, however he took them to Odessa instead of Angela's chateau in Geneva as he was supposed to. Hiro attempts to teleport them there, but finds his power doesn't work. Angela realizes that like his great-grandfather and uncle, Nathan has the ability to steal powers and has taken Claire's, resulting in her death and Hiro's, stranding him in the past. Angela realizes that they need to keep the children separate to keep Nathan from taking his sister's powers and she goes off on her own, warning Hiro not to encounter his past or future selves.

In 2014, Noah goes looking for Hiro with the help of Molly Walker who is able to detect his power in Odessa, but not Hiro himself. Molly leads Noah to a house where an aged Hiro greets them and introduces Noah to his grandson, having married Anne Clark and raised Nathan himself. Hiro explains that Nathan's power is to take the abilities of other evos, but he can only keep one at a time. He still possesses Hiro's power so Nathan can return Noah to his own time, having been trained in the use of his powers by Hiro. M. F. Harris interrupts them and takes Nathan hostage, but Nathan teleports Harris across the room, allowing Noah to kill him. Nathan then takes Noah to see Angela and Malina.

Upon Noah and Nathan's return, Hiro coaches Nathan in using his power to return Noah to his own time. After Nathan succeeds, several Harris clones arrive. Seeing them, Hiro orders his son to take Anne and Caspar to safety while he holds off Harris. Nathan reluctantly teleports away with the other two after Hiro says goodbye to his wife and gives Nathan the 9th Wonders! comic that helped Hiro learn his destiny in hopes it can help Nathan too someday. Hiro then draws two swords, tells the Harris clones he has been waiting for this for a long time and attacks them.

When discussing how Tommy can save the world, Anne tells him that Hiro was amazed by Tommy's abilities and said that Tommy was capable of much more than he was. Anne also tells Tommy about Hiro telling her that there are many possible futures.

While trapped in the Eternal Fortress, Tommy witnesses several memories of him and Hiro, including Hiro holding him as a baby and Hiro's last words to him, driving Tommy to tears.

After escaping Evernow with Ren Shimosawa's help, Tommy realizes he can split himself in two despite Erica Kravid telling him that not even Hiro could do that. Tommy tells Erica that Hiro trained him all his life to stop the H.E.L.E. and he freezes time and successfully splits himself in two.

After rescuing Noah Bennet, Tommy tells Noah that he tried to stop the H.E.L.E. "a thousand times" but failed so he did what Hiro taught him and followed the "tiniest thread, the smallest butterfly" which led him to Noah who he realized held the key to stopping the H.E.L.E.

In 2008, Trevor Mason mentions a man in Tokyo, Japan who can manipulate time, referring to Hiro.

Immediately after Claire exposes the existence of evos to the world, Noah approaches Hiro and Ando and tells them that they have to leave the carnival. Hiro agrees, but tells him that not all of the carnies he teleported away will keep quiet about how they escaped. Realizing that there is nothing they can do to stop Claire's actions, Hiro joins hands with Ando, Noah, Lauren, Peter, and Sylar, and teleports them away.

On the Highland Dream in 2012, Mohinder tells Claire that he hasn't heard much from Hiro, only getting the occasional email from him.

In the Quarry, Cassandra Hays finds an issue of 9th Wonders! with Hiro on the cover. Cassandra also finds a Pinehearst file on Hiro, and Isaac's sketchbook with a drawing of Hiro and the Dinosaur.

Prior to Heroes Reborn starting, an app was released with a video summary of Hiro's history. The summary included: