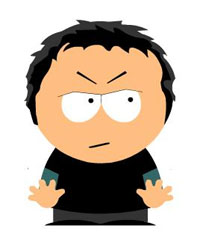 Member: Danko
Character: Hydro
Ability: Hydrokinesis
Danko was set on a two week trial, which would tell us if he would be a member of the team. The trial started on the 22nd of June, and would then end on the 6th of July. However, we the team decided to stop the trial on June 28th, 2009. The team saw his hard work and how much he would help the series be as good as it can possibly be.

Danko's character is the villain Hydro. Hydro has the ability to control water, he uses his power to escape The Hunter and lead resistance against the government operation.

While Danko was on the trial, his jobs were to create any characters needed, update the portals, and update the volume 2, Origins, and CH main page. However since joining, Danko is targeting the unfilled character histories, as well as helping out writing episodes for both CH and Origins. Danko's favoured episodes are the season 2 finale consisting of both Kill or Be Killed and The Die Is Cast. Followed by Midas Touch (as he wrote it ) and Live Together, Die Alone.