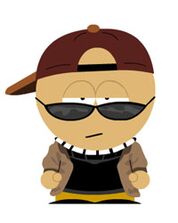 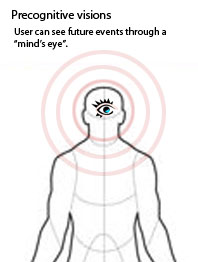 65%
A true Londoner, Mike Douglas was born and raised in the West End of London. Both of his parents were successful entrepreneurs, and considerably rich. Mike attended a boys' school outside London, where he succeeded on the football team as well as academically. It was during this time that his ability manifested. One morning, Mike was in the lunch line when he suddenly felt dazed and disoriented. His vision became blurry and he began seeing his first precognitive vision. During this vision, he saw his school get destroyed by an earthquake. When he regained his composure, Mike immediately rang the school's fire alarm and caused the entire school to evacuate, out of fear of the earthquake. Minutes after everyone was outside, the earthquake occurred, and the school building was utterly destroyed. Mike's fellow students and teachers, despite thankful of Mike for saving them, became terrified of Mike due to his precognition of the earthquake. During his remaining years in school, Mike became an outcast, but managed to control his ability well, even getting to the point where he could access his visions at any moment. After graduating from the school, Mike headed back to London to settle down. However, the next day, his parents were fatally injured during the King's Cross station fire. Struggling to cope with the death of his parents, Mike became involved with the local criminal crew, where his skills and ability caught the attention of high-ranking member, Shark. The Company made its move at this point, using the pneumatic syringe's radioisotope to keep track of Mike's activities as Shark's right-hand man.

The subject has an easy-going personality, and his mediocre IQ scores are indicative of his laid-back and colloquial nature. It has been discovered that any mention of his parents can cause Mr. Douglas a psychological breakdown, likely due to his parents' untimely death at King's Cross. That aside, the subject appears to be psychologically well-rounded and calm in his nature.