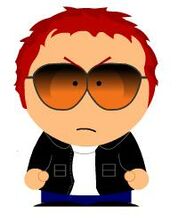 65%
Tyler refuses to discuss his past with anyone. The only thing he tells anyone is that he is from Phoenix, Arizona, and decided to leave the United States when “something dreadful” happened. He is a self proclaimed “lone wolf,” never getting close to anyone he doesn’t need to. He believes that he can use his ability for the good of mankind, but has been struggling over where to draw “the line” between good and evil.