An individual calling himself "Jack the Ripper" uses his ability for murder.

For an episode-by-episode summary, see Jack the Ripper: Volume One history.

Andy Lewis utters the name "Jack the Ripper" as he regains consciousness, and later, Officer Bonkin ponders to himself the case of Jack the Ripper, and decides to recruit the evolved humans to help him hunt Jack down. When the team of evolved humans learn of this, they reluctantly agree. Bonkin tells them that he knows that Jack's next murder will be at Whitechapel, at 9 o'clock.

At Whitechapel, Jack the Ripper attacks the Cockney Heroes team just as they figure out what his ability is. Jack moves through the shadows to get to Irony, he then makes Irony fearful and then takes over his body. He manipulates Irony into using ability diminishment harmfully on Gabriel Bishop. However, Claude knocks Irony out to prevent him from doing damage. Jack's control over Irony disappears, and he escapes.

Three days later, outside a hospital, Jack uses fear induction to take over Frederick Davies's body. As Frederick, he attacks the Cockney Heroes team, who are inside the hospital. Gabriel manages to send electricity flying at Jack, who is hit and thrown out a window. 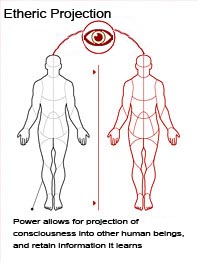 Derek and Irony remember that Jack had etheric projection.

Jack possesses the ability to project his spirit into anyone's body. This allows him to access any of the victim's abilities and/or skills. Aside from this, he has shown that he is capable of creating illusions for the spirit of the victim. (Murder at Whitechapel).

Jack has absorbed the following abilities, both from unknown individuals:

It is unclear how Jack absorbed these abilities, since it is unknown if his main ability allows that or if it was absorbed as well with a totally different ability.