From Heroes Wiki
< User:Radicell
Jump to navigation Jump to search

Lance Madrox, also known as Shark, is a senior member of an England-based group of criminals. He is an evolved human with the ability of object replication. After witnessing other evolved humans in London using their abilities, Shark is now hoping to track down these specials, the reasons for which are unknown.

Hidden in the Darkness

Shark leaves his organization headquarters and heads for his car, which is parked in a parking garage. While in his car, Shark sees, out of the corner of his eye, a man turning invisible, and another man using alchemical powers to turn a pencil into gold. When the group of men get into a car and leave the garage, a shocked Shark immediately tails them, curious that there are other Londoners with special abilities. However, Shark does not notice when the car turns and heads for an abandoned warehouse on the outskirts of London. Disappointed, Shark drives in the direction of the local pub, and while doing so, reaches into his wallet (which contains only a £1 bill) and pulls out banknote after banknote until he has £10 in his hand.

Born in the small town of Ilkeston, England, Lance Madrox lived the common countryside life, until the divorce of his parents. Lance lived out the rest of his childhood under his mother's care, but the divorce had taken a toll on him; Lance had become rebellious and unwilling to attend school.

One day, when his family was facing repossession and eviction, Lance found a £10 bill on the sidewalk. This was when his ability manifested for the first time. Greedy for money, Lance reached down and grabbed at the banknote — however, after picking up the bill, he discovered another £10 bill in the same place. After grabbing the second bill, he noticed that he was actually pulling duplicates of the bill out of the £10 bill. Shocked and amazed, Lance replicated as many £10 bills as he could carry, and brought them all back to his mother, expecting positive reactions from his mother. Instead, he was shunned and his mother questioned how he got his hands on the bills. After scrutinizing the bills, Lance's mother discovered that they all had the same serial number. Suspecting her son of being a counterfeiter, Lance's mother told Lance to leave the house and never come back.

Lance then traveled to London, and began living a high-class life, since money was no problem for him. When at a bank in Holborn one day, Lance was held hostage when a group of bank-robbers seized the bank. While the other robbers were at the vault, Lance managed to get the attention of one goon, and he showed him his ability using banknotes. He was brought to the leader of the robbers, and was soon recruited into their group. Since then, Lance has made his way up the ring, and is now a senior member of the group of criminals. He has also adopted the codename Shark, which most of his associates know him by. The Company is considering making the trip to England to bag and tag Lance, who is considered highly likely to use his abilities mainly in a harmful way.

The subject's witnessing of his parents' divorce at a young age is what is suspected to have set his mind onto a dark, greedy, path. The subject has been identified as an unusually calm man, who notices every detail and is very observant. Also, the subject is known to be extremely intelligent, as evidenced by the complexity and multitude of criminal acts that him and his accomplices have pulled off since he joined the ring. 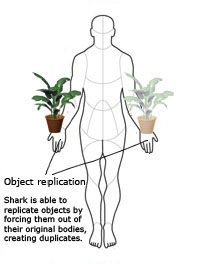 Shark has the ability to reproduce exact copies of objects. He has demonstrated proficiency over this ability, and was able to pull 10 banknotes out of a single banknote in his wallet without even looking at the wallet.