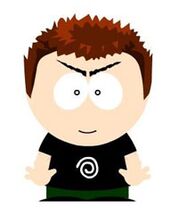 75%
Devin was born in 1965 in London. For the most part, he lived an ordinary, if miserable life. His family was quite poor, and his parents were more concerned about his well-being than the family finances. As a boy, Devin appreciated this attention, not knowing the trouble it would bring the family.

However, as he matured, he realized the danger that the family was in. He became deeply versed in the language of finance and banking, to the point that he was working as an intern at a very large bank as soon as he graduated from school. His parents, free of that responsibility, continued to shower their love and affection on him. But as a young adult, he was more annoyed than previously, and he left the house, giving his parents a final hug, all the while secretly wishing that they would just forget about him. Of course, he felt guilty, what son wouldn't, so he went back to his home as soon as he could. He entered the home, but his parents were nowhere to be found. Suddenly, his father charged him with a baseball bat, shouting about intruding. It didn't take Devin long to realize that his parents had no idea who he was. In fact, THEY had no idea who THEY were. They claimed to be completely different people, whom Devin had never heard of before. He left the house, saddened, but secure in the fact that at least he had a job. The next day, however, he told his employers and friends the story. They greeted him with a good clap on the back, or a handshake, or a hug. The next day, of course, they had all gone off the deep end. None of his colleagues showed up for work. They answered their phones as completely different people, who thought that they had different jobs. His friends were the same. Now Devin was out on the streets, homeless. Devin thought that he was going mad, so he decided to test his insane theory that HE had caused his friends to forget him. He found a man on the street, and grasped his hand, picturing a completely different personality. Soon, the man was acting like an eight year old. He tried it again, and now the man was acting like an eighty year old. Over the years, Devin sharpened his ability greatly. He robbed houses, and then changed the owner to a different person, who knew nothing of the stolen money. He created a list of personalities, and committed them to memory, for future use. Now, he lives as a normal man, secretly taking what is not his. When Company agents come after him, he simply makes them think that they are investment bankers or weathermen.

He is highly dangerous for anyone who tries to approach him with hostile intentions.